An important history lesson in our time of decline... Michael Collins 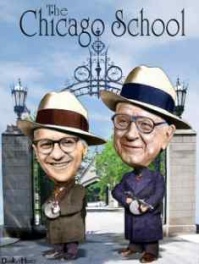 Disclaimer: This is not a conspiracy story, though it has all the elements of one. Anonymous shadowy figures, international "societies", complete political "ideologies" created for convenience alone, social institutions corrupted through the mere distribution of cash (science, politics, universities, governments and even the Nobel Prize), and a global strategy designed to "rule the world" - no doubt about it, this one is better than a novel. But, don't get carried away. There are no secret ceremonies or lizard people in this tale. Nor is it a story about groups named after Italian light fixtures or German beer. It is instead the story of how "everyday conspiracies" work. (Image: DonkeyHotey)

Karl Marx wrote that the ruling ideas of any age are the ideas of its ruling class. Looking backward, it is hard to dispute this observation, but how does it actually work? That is what our story is about. It starts with the businessman below and his simple frustration at the success of Marxism as an idea, first among his own workers and then amongst the American establishment whose wide-spread adoption of the appropriately conciliatory "New-Dealism" was entirely in response. In an economic system in which everything is reduced to a commodity, a man of means should be able to simply buy a counter-idea, shouldn't he? So it turns out...