The New York Times wrote an overview article on the results of an economics research paper, Expenditure Cascades.

A while ago, in a diary entitled Are Hard Times near? The Great Decline in interest rates is ending I pointed out that the great decline in interest rates that began in 1981 looked like it was coming to an end, and with it American consumers' ability to refinance debt at lower rates. I noted that if consumers could no longer refinance at better terms, and if their wages weren't growing, the engine of the American economy would stall, not just for a short time, but for a very long period -- What I have called "The Slow Motion Bust."

With oil prices at $126 a barrel, and $4 a gallon gasoline, the boa constrictor of higher prices has tightened around the average American's budgetary breathing space some more. A look at how much and how consumers are coping, below.

Despite large bonuses for some, average real disposable income per capita in February remained lower than in March 2007 as real spending stagnates with meager savings.

Today’s BEA report on personal income and spending in February provides important context for anticipating the possible depth and length of the current recession.

BEA reports that even with large end-of-year bonuses for a few (mostly in the debt industry that is seeking taxpayer bailouts for their looted companies,) the average real disposable income per capita rose only 0.3% in February, up only 0.3% yr/yr and still below levels reached in March 2007. All of the gain in worker compensation in February (and more than all in January) is accounted for by the large bonuses. Proprietor income fell sharply in February and is down sharply yr/yr. 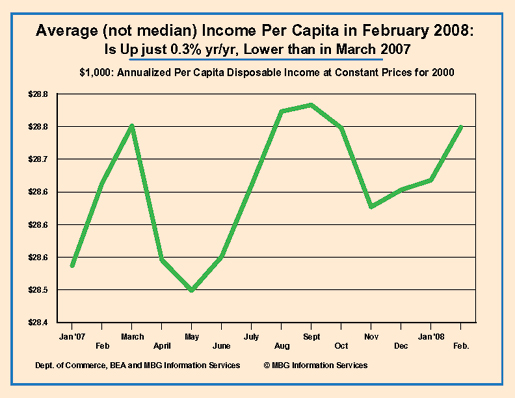 Despite no real change in January spending, for the first time on record households spent more than all current incomes for the 3rd consecutive month.

Today’s BEA report on personal income and spending shows that price-adjusted household spending was unchanged in January. Nevertheless, total household spending in January was more than ALL after-tax incomes as households again dipped into savings or fell deeper into debt for a record third consecutive month.

Note that these are not “median” figures but total income and spending for ALL households including those few that received very large bonuses in January.