In a recent article we wrote:

America today is very different from the country that fought the Revolutionary War and framed the Constitution. Then, it was a nation of farmers; today, it's a nation of corporations. 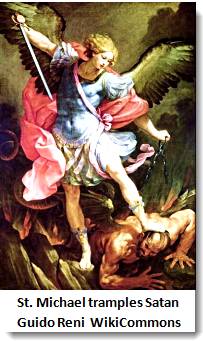 "Mr. Buffett. You are no different than Goldman Sachs and the other exploiters funded by the hard work of everyone other than those who reap the benefits of that work."

The people's oligarch Warren Buffett just wrote a thank you letter to "Uncle Sam" published in the New York Times. It is the height of cynicism. (Image)

Buffett has a carefully crafted public image as a brilliant but people-friendly master of investments. We hear about his regular table at an Omaha diner where he conducts business (just plain Warren) and we see his occasional public stands for reasonable policies like the inheritance tax.

He claims that "Uncle Sam", the government, saved us from a financial catastrophe that would have swallowed up his company. He then endorses the notion that the housing bubble was based on "mass delusion" - meaning it was our fault. But he forgets to mention that he took advantage of the 2008 crisis to purchase a $5 billion interest in Goldman Sachs. And he forgets whose money "Uncle Sam" stole from the Treasury to save him and the rest of his cronies. What a hypocrite. 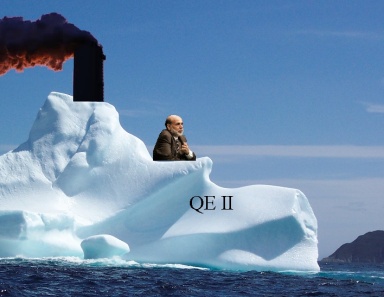 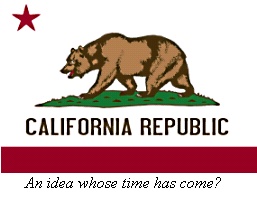 California's economic depression is the key campaign issue. The official state unemployment rate is 12.4%. When you add those who've simply given up looking for a job plus the marginally employed, the figure for the state is over 20%. Official unemployment in the San Joaquin Valley, a huge agribusiness region, ranges from 15% to 19%. Long the economic engine for the nation, the state is not accustomed to hard times.

The corporate takeover of California is on hold according to the latest polls out of the nation’s largest state. Just nine days before the election, the Los Angeles Times and University of Southern California poll shows a nearly impossible uphill battle for the big business ticket of former eBay CEO Meg Whitman and former HP CEO Carly Fiorina.

Among likely voters in the governor’s race, Brown leads Whitman 50% to 38%. In the race for United States Senator, two term Senator Barbara Boxer maintained an 8% lead. The leads by Democrats come from a brand new constituency, those who "never" go to church. More on that later.

The Associated Press ran an article Sunday that focused on the wasted funds during the US reconstruction efforts in Iraq. There were stories of an unused children's hospital, a prison for 3,600 that will never open, and the diversion of reconstruction funds to pay off Sunni fighters to turn on al Qaeda.

AP failed to mention that the main reason that we have to rebuild Iraq is that the United States government invaded it and destroyed everything it could in a display of shock and awe. Also unmentioned were the unique post invasion strategies of no security for sites like power plants that keep the country running and the dissolution of the 400,000 man army, the main institution that kept order in the country before the invasion. But I digress.

Anyone paying attention should know that financial controls and accountability went out the window from the very first days following the defeat of Saddam Hussein's military.

One of the most visible measures of the condition of working families is the price level of a day’s wages. So, we figured it might make sense to subject those wages to the same sort of analysis we used in the last post: the withering criticism of an ounce of gold.

Here is a chart of an average day’s wage since 1964, as presented by the Bureau of Labor Statistics: 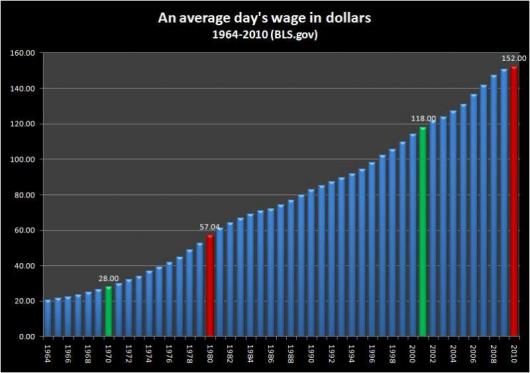 As is befitting a labor force enjoying the prosperity of the freest, most productive, nation on the planet, we have seen our wages rising for the entire period from 1964 to 2010. Even through depressions as intense as that of the Great Stagflation (the first set of green and red bars) and the current Great Recession (the second set of green and red bars) the average day’s wage of American workers has never fallen year over year.

Unfortunately, things are not so rosy when the value of a day’s wage is measured by an ounce of gold: 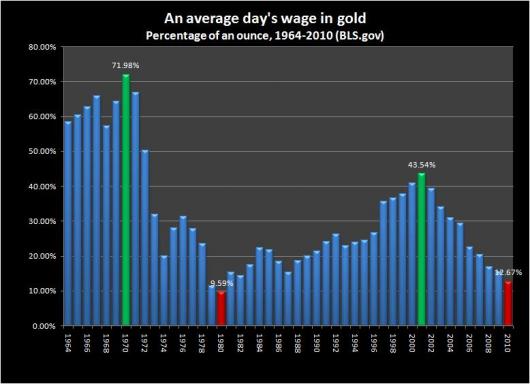 I don't believe there is any investment, outside of a mania, that elicits more emotion, both positive and negative, than gold. People love it or hate it, there isn't much in between. It's because of these strong emotions that there is so many misconceptions about the yellow metal. Emotions tend to cloud normally reasonable minds to the point that they miss either opportunities or dangers.

Which brings us the current bull market in gold. What does gold hitting all-time record highs mean? To answer that you must brush away the myths and misunderstandings of what gold is and why someone would purchase it.
I am going to attempt to do that.