by Ralph Gomory and Richard Sylla

This article was originally published by The Huffington Post

Great corporations exist only because they are created and safeguarded by our institutions; and it is therefore our right and our duty to see that they work in harmony with these institutions.

Protest for economic justice and you are now a terrorist?  Wonder why all of a sudden cities across America coordinated and shut down the Occupy Wall Street movement?  Now we know and it was coordinated by the banks.

Dr. Andrew Sum crunched the numbers and for those graduating from college with a Bachelors we have some startling news. A whopping 53.6% of those under the age of 25 who have a college degree are either unemployed or unable to land a job in a field associated with their college major. Associated Press:

Think Occupy Wall Street has dribbled to the oblivion of political history?  Think again.  It seems an offshoot of the OWS movement, The 99 Percent Working Group, Ltd., a non-profit, came up with the 99% Declaration and National General Assembly.

The uber-rich have given us a Christmas gift. Yes, they have formed an organization, the Job Creators Alliance, to run public relations against us imbeciles who point out they are greedy bastards and to shape the national agenda. They even ask for donations on their website so they can pour money into lobbying, and media spin. All of this effort is to advocate for...the super-rich.

Thank you Bloomberg News who alerted us to the wonders of the CEOs, board members and super rich, bestowing their gifts upon us to explain why they should have all the money.

If successful businesspeople don’t go public to share their stories and talk about their troubles, “they deserve what they’re going to get,” said Marcus, 82, a founding member of Job Creators Alliance, a Dallas-based nonprofit that develops talking points and op-ed pieces aimed at “shaping the national agenda,” according to the group’s website. He said he isn’t worried that speaking out might make him a target of protesters.

“Who gives a crap about some imbecile?” Marcus said. “Are you kidding me?”

This evening's episode of Harry's Law literally takes on the banks and uses the show, as a Populist soapbox. The plot contrasts how a homeless, foreclosed on, single mother, turned bank robber, gets 20 years, yet if one is incorporated and has lobbyists, then one gets $7.7 trillion in Federal Reserve loans. The episode is below.

While basting your bird or in-between nibbles, we bring you some Economic Turkeys of 2011.

Can you believe how low we've come when a candidate for President can say child labor is a really good idea and not be immediately tarred and feathered? 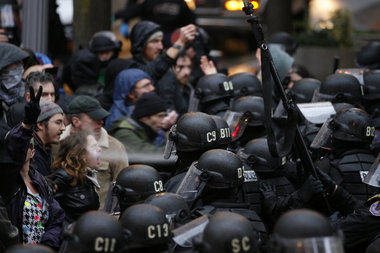 Zuccotti Park was raided in the wee hours of the morning by NYPD.