The New York Times proclaimed corporate profits were the highest on record in Q3 2010. As a result a flurry of reports are wondering why the hell corporations are not hiring American workers? Firstly, the title from the New York Times is misleading, although the wondering why corporations are busy screwing and squeezing workers isn't. Corporate profits are not adjusted for inflation so it's doubtful they are really at record highs. That said, they are up 27.8% from a year ago. The reason corporate profits are not adjusted for inflation is due to the profits from abroad with their differing inflation rates and god knows where which profit from what country in what part of what service and good or profit came when. ....That said..... 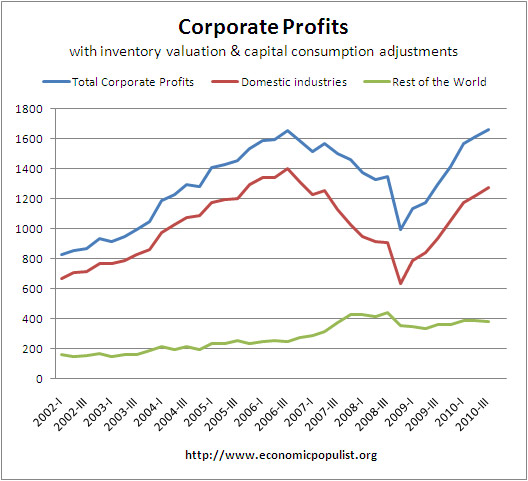 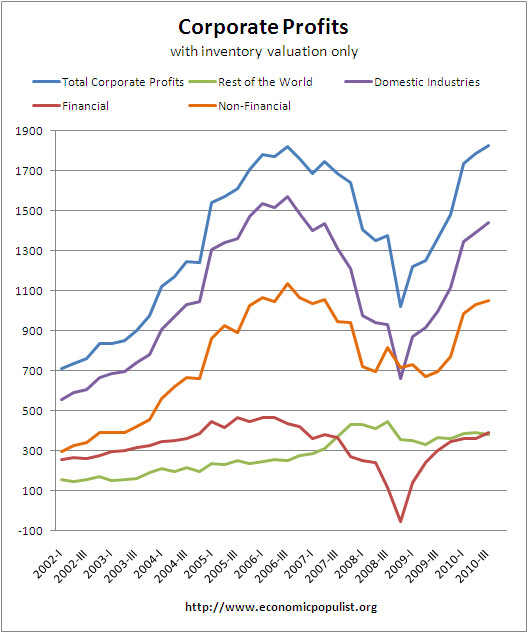 This data in the next above graph is the same which was used to create the graphs posted by Matt Yglesias. He doesn't get it quite right, those graphs are not adjusted for inflation, more it's just the breakdown described above, this time, only inventories are calculated in and not capital consumption. Since we have much more variable rates of inflation in the rest of the world, as well as expansion in the rest of the world, looking at domestic profits gives the better picture. Recall U.S. inflation has been flat and nil. (The Financial Times doesn't get it right either).

Corporate profits are buried in the Q3 GDP, 2nd revision report, table 11. One must wonder why the BEA mixes the two reports into one document and there is no doubt corporations are having a lovely V recovery while the U.S. middle class continues to erode.

Notice the BEA text, it reports only the percentage changes from last quarter in the main text of the GDP report. One has to go down to table 11 to see corporate profits after inventory evaluation and consumption were an all time record $1,658.5 billion for Q3 2010.

What's interesting to look at are direct investments abroad. We only have them up to Q2 2010, graphed below. Look at the Q2 2010 investments abroad statement from the BEA, it appears from this at least corporations are spending, just not in the United States. Bear in mind this is Q2, or data from April, May, June.

Income receipts on U.S.-owned assets abroad increased to $161.1 billion from $160.5 billion. The increase was more than accounted for by other private receipts (which consists of interest and dividends). Direct investment receipts and U.S. government receipts declined.

It is astounding to me how from the main stream press to full bore economists deny globalization to explain how in God's name the United States threw away 8.5 million jobs with these kind of corporate profit numbers. They will scream productivity, skills mismatch, just about anything and everything beyond U.S. workers being displaced by job exportation and foreign worker importation. It's stunning. This op-ed states the obvious:

The middle class is shrinking and college-educated professionals are fast becoming the new working class. Exposed to the harsh vicissitudes of the global market, this growing legion of displaced workers is now competing with immigrants (legal and illegal) and lower-skilled Americans for hours at Home Depot and Burger King.

Meanwhile, Bill Gates and other high-tech entrepreneurs press Congress for more H-1B visas to bring in skilled workers from overseas.

Squeezed out of jobs they supposedly cannot or will not do, the American middle class atrophies, and the U.S. starts to look more like Brazil and other second-rate countries where the preponderance of the population is either very rich or very poor.

Now where did these Q3 2010 corporate profits come from? The financial companies, i.e. the Banksters mainly. 64% of the Domestic profit increases were the financials for Q3 2010.

While we get repeated claims of productivity increases, let's look at Q3 2010 U.S. labor productivity. It's simply not soaring enough to explain an unemployment rate of 9.6%, over 17% if you want to count the broader unemployment metric.

So, what do the above numbers show? They show.....frankly, the Banksters are back at it, making huge profits and multinational corporations are busy making tons of money and hiring lots of people....in the rest of the world. Below are receipts and payouts by U.S. 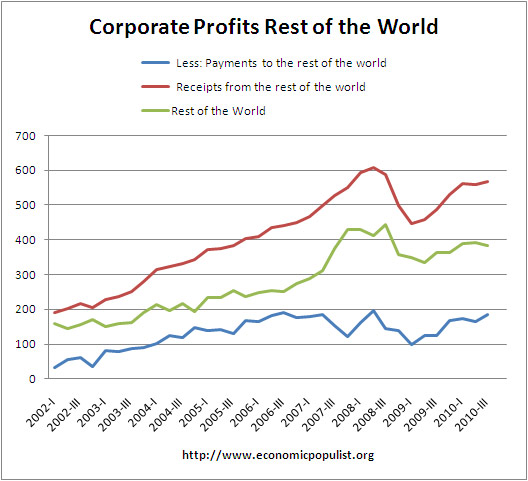 Here is the situation from the gross national product in the Q3 2010 GDP report:

What can I say, the answer is right there in the graphs.

I am not an economist. I have a one year IT diploma. You provide me with a vital service in breaking these numbers down. You give credence to this post by first explaining that these are not inflation adjusted numbers. They are still an abomination (my opinion).

I appreciate how you give the formula for GDP each time you write on the numbers. I appreciate you showing what imports do to that number every quarter.

I understand the bottom line, class warfare has been declared and the less well to do fight over crumbs. Please stay in the game. "The Economic Populist" is invaluable to me.

The more I get into this, the more I forget what ones does not know or understand in deciphering economic reports, so I really appreciate this feedback. That's the agenda, at least for me, is to bridge between economics and explaining what the hell this crap means to the real world and real people.

To me, I think all of it isn't that tough to follow if someone just gives a bridge, a helper to explain what these terms mean.

Although when it comes to the Bureau of Economic Analysis, whew! Talk about some obscure accounting methods and adjustments! I wanted to just write up a little blurb, because I didn't quite believe corporate profits were soaring from other economic reports (although I knew it sure didn't match up or has decoupled from the unemployment rate), ya know, take an hour...

Honestly in terms of what really defines a domestic industry....hmmmmm, there is the basic definition that they are incorporated in the U.S. but is that just all there is to it? I think not with subsidiaries and FCDC (foreign controlled domestic corporation) and the Caymans.

The "rest of the world" is where it gets amazingly confusing because they are posting a net amount, but then you look at receipts payouts, different story, but this is common, trying to statistically separate out the U.S. domestic economy vs. globalization, even with U.S. based corporations.

$2.5 million in my division for jobs in India.

They are hiring. Just not in the US or Canada.