We've all been wondering how home prices could be soaring when wages are so low and an estimated 10 million foreclosures have been completed.  Now a wave of reports are pointing to more trouble in residential real estate.

Many homeowners obtained home equity loans during the housing bubble and delinquencies on these loans are on the rise.  The reason is the payments have ballooned up.  For the first ten years of many home equity loans, the payments are low due to being only interest on the loan and not the principle.  Year 11 can be a budget buster as the monthly payments suddenly balloon as principle of the loan is added to the monthly payments.

U.S. borrowers are increasingly missing payments on home equity lines of credit they took out during the housing bubble, a trend that could deal another blow to the country's biggest banks. The loans are a problem now because an increasing number are hitting their 10-year anniversary, at which point borrowers usually must start paying down the principal on the loans as well as the interest they had been paying all along. More than $221 billion of these loans at the largest banks will hit this mark over the next four years, about 40 percent of the home equity lines of credit now outstanding.

From the below graph of home equity loans we see a major increase around 2004.  These are the maturing loans where the payments will jump up. 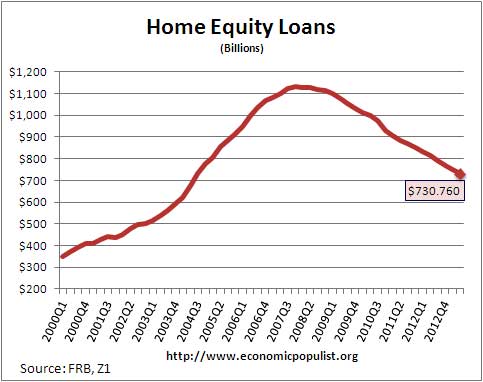 The reason this is a problem is these loans can result in a 90% loss for the banks and for the first ten years, only interest payments are due on these loans, not principle.  There are two types of home equity loans, closed contracts, often given to lower credit score holders and HELOCs.  During the housing bubble, many homeowners took out equity loans to make ends meet, as well as an additional mortgage to purchase a home.  Now the larger payments are coming due.  Roughly 10.8 million households, or 21% of homes still have negative equity.  Still if one adds up all of the numbers, this cannot be cataclysmic as assuredly not all $221 billion in home equity loans hitting the 10 year mark will default and cause a 90% loss for banks.  The news does point to more trouble for homeowners with more defaults, bankruptcies and foreclosures and thus less profits for the banks.  The above graph shows all home equity loans with about $480 billion held at commercial banks.  The New York Fed and others warned on these second liens being a problem a year ago since default rates have not declined and are now increasing.

Then, you might have wondered who has been buying up all of those homes of recent.  Every month we point out there is simply no way the typical American can afford these home prices with such low income amounts.  It turns out a large amount of home purchases are hedge funds and groups of rich investors.

These hedge funds are planning on renting many of these units, but if that isn't bad enough, after all who wants a hedge fund as a landlord, they are planning on bundling rentals into a new sort of derivative for trading.  This is precisely how the financial crisis happened, bundling toxic mortgages into derivatives and selling them like a game of musical chairs as to who would be stuck with the rotten hot potato last.  Now they want to do the exact same thing, but this time with underlying assets being rental properties and related assets instead of bundled mortgages.  We might even call these new derivatives securitized pools of American suckers, renting from slum landlords corporatized like some form of contractual law debtors prison.

For Blackstone, at least, the logic is simple. The company wants money upfront to purchase more cheap, foreclosed homes before prices rise. So it's joined forces with JP Morgan, Credit Suisse, and Deutsche Bank to bundle the rental payments of 3,207 single-family houses and sell this bond to investors with mortgages on the underlying houses offered as collateral.

The Rental Empire agenda is terrible news for rents as well.  By creating a landlord monopoly, one can just guess which way rents would go and that is up.  What is worse, these new corporate landlords are completely negligent on repairs and suing them is near impossible.  As a result people are paying top rents to experience powerful, out of reach slumlords, where refusal to make properties habitable is corporate policy.

The institutional investors who have bought up so many homes may also have created another housing bubble generally.  If that's not bad enough, the Chinese have also been swooping in, buying up America's houses.

Investors, specifically institutional investors, have vast sums of cash. They have bought about 100,000 homes, most of them previously foreclosed properties. They bought the homes in a limited number of markets, mostly in the West, pushing prices dramatically higher as competition for the properties increased. They are now renting them, and even selling bonds backed by the rental streams.

The Chinese are buying up houses for investment as well as a place to live while their kids, versus your kids, attend America's higher education institutions.  Think about your plumbing breaking and trying to get someone in China to fix it as a renter.  That is what is happening.

More and more evidence is trickling in that the great housing recovery, proclaimed to be so by so many pundits, is not what it appears to be.  Americans are not recovering from the financial crisis, Wall Street is.  Worse, Wall Street is trying to squeeze even more out of the already financially blood run dry and drained average American.  Chinese, who have become middle class by obtaining U.S. industries and jobs, are also swooping in to takes what's left.  The illusion that real Americans are recovering their homes, livelihoods and financial lives is just that, marketing and public relations fluff and puff.