Challenger, Gray & Christmas tracks layoffs. In their May Report (attached), the tally of layoffs is 38,810. April announced layoffs were 38,326. 16,697 of the layoffs were in government and non-profit, which is an increase from last month.

New York had the most firings, with 18,960 layoffs in that state alone in May.

The number one reason for firing people is cost reduction. 15,998 of the 38,810 firings gave this reason.

While Challenger & Gray compares this to last year and seems to say how great it all is, the reality is more corporations have been offshore outsourcing and labor arbitraging American workers for over a decade now. Below is the Challenger Quarterly Layoff tracker starting in 1989. One can see the pattern of treating workers as disposable commodities, starting to escalate as technology, such as cheap telecommunications, expanded and bad trade deals, like the China PNTR came into effect. Global labor arbitrage is a long term structural problem for the U.S. labor force. 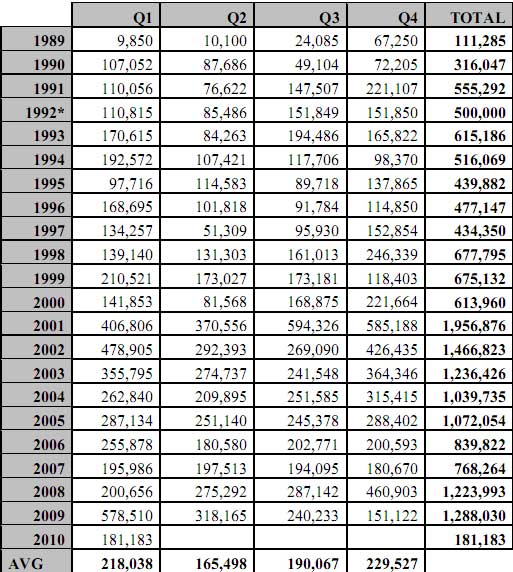 This is the fallacy of comparing rates of change instead of absolute levels. While it's great news layoffs have decreased since 2009, the United States also has an official unemployment rate of 9.9%, with an ominous 45.9% of the official tally being unemployed for 27 weeks or longer. Even worse, the broader unemployment rate is 17.1%.

It's almost funny (except for the lack of real jobs of course).

Needless to say, when I write up those reports I will parse out the census jobs, temp jobs as well as the changes in populations and even the "birth/death" model adjustments, but because team Obama needs a good number, frankly I wouldn't be surprised either to see a blow out headline buzzer than when one looks into the statistics, is an illusion. We'll see.