The preliminary Consumer Confidence Index increased to 50.2 in October, up 1.6 percentage points from last month's revised 48.6. The below consumer confidence chart graphs out the American dissatisfaction doldrums with the economy. 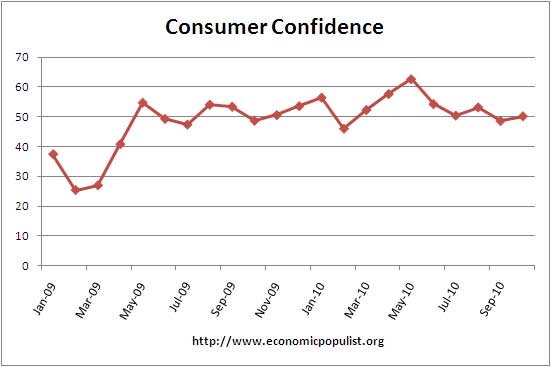 The Present Situation Index increased to 23.9 from 23.3. The Expectations Index improved to 67.8 from 65.5. These are still low numbers and the Conference Board expects low consumer confidence like this for some time.

Consumer confidence, while slightly improved from September levels, is still hovering at historically low levels. Consumers’ assessment of the current state of the economy is relatively unchanged, primarily because labor market conditions have yet to significantly improve. And, despite the uptick in Expectations, consumers continue to be quite concerned about the short-term outlook. Both present and future indicators point toward more of the same in the coming months.

Why? It's all about the jobs. Jobs, jobs, jobs.

So, while people know there are no jobs out there, unfortunately what policies would do what to create jobs.....there they still don't quite get that one.