The key series of news stories from the past week that will have the greatest long term impact on the global oil markets came out of Saudi Arabia, and none of those stories was even about their oil production.  First we learned that the Saudis had posted an $98 billion budget deficit in fiscal 2015, obviously due to this year's drop in oil prices.  That deficit amounted to about 15 percent of their gross domestic product for the year, less than the 20% deficit that was widely expected.  For a perspective on the relative size of that, our largest budget deficit, in fiscal 2009 (starting October 2008), was about 10% of our GDP.  Although the Saudis drew down on some of the reserves that they'd accumulated over the years to cover the shortfall, much of their deficit this year was financed the same way the US finances its own deficit every year; they issued bonds.  On at least three occasions this year, the Saudis issued sharia-compliant bonds, denominated in riyals and carrying low interest rates, most of which they sold locally to cash rich Saudi banks.  The point is that this was all done without any major economic dislocation; showing the Saudis are handling the oil price crash better than was expected, and that life in Saudi Arabia has gone on much as it did before, just like life in our oil dependent states of North Dakota and Alaska has gone on, despite lower oil prices.

More importantly, however, the Saudis coupled their budget announcement with one of a forthcoming radical fiscal austerity program, including an increase in gasoline prices, an increase in electricity charges for the wealthiest consumers, a modest increase in water costs for everyone, and increases in energy prices for industrial users, such as refineries and petrochemical operations.  They also plan to begin dismantling their welfare state, cutting out some of the freebies and perks they initiated after the Arab spring, and plan to gradually privatize some state-owned entities, introduce a value added tax, and levy a tax on tobacco.  Although some of these changes will be phased in over a period of 5 years, the immediate impact will be to cut their fiscal 2016 spending by 14%, to 840 billion riyals ($224 billion), from 975 billion riyals last year.

To put these budget cuts in further perspective, included below is a graphic from Haver Analytics and BofA Merrill Lynch, sourced from an article at Zero Hedge which shows how long it would take the Saudis to burn through their foreign exchange (FX) reserves under various oil price and budget scenarios, which was compiled before these budget cuts were announced.  The graphic is divided into three basic sections, the first for oil prices at $30 a barrel, the second for oil prices at $40, and the last for oil prices at $50 a barrel.  Within each of those oil price scenarios, they show as a dark blue bar the number of years that the accumulated Saudi deposits to their sovereign wealth fund (SAMA, or the Saudi Arabian Monetary Agency) will last with a variety of budget and fiscal funding scenarios.  To walk through what's on that graph, "flat" in each case would represent how long Saudi reserves would last with no change from last year’s Saudi budget.  "Without one-offs" would represent a budget scenario where they return to their pre-Arab spring spending, before they started passing out freebies to their citizens, which would amount to a 4% budget cut.   Then the next two bars in each group represent how long they could continue living off their accumulated reserves under 10% and 25% budget cuts.  Furthermore, within each of those 4 scenarios for each of the 3 varied oil price situations, the graphic is further divided into how long their reserves would last if their reserves is all they use for funding, and how long their reserves would last if they financed 50% of their operations by issuing debt instruments.  For an example, the 6th bar from the left shows that the FX reserves in the Saudi's sovereign wealth fund would last 4 years with oil at $30 a barrel and just a 10% budget cut, if they funded 50% of their ongoing operations by issuing bonds.  Extrapolating from the figures shown in that graphic, we could thus estimate that the Saudis could live on $40 a barrel oil with this newly announced budget for nearly 6 years before they deplete their sovereign wealth fund, if they fund half of their government spending with bond issuance.. 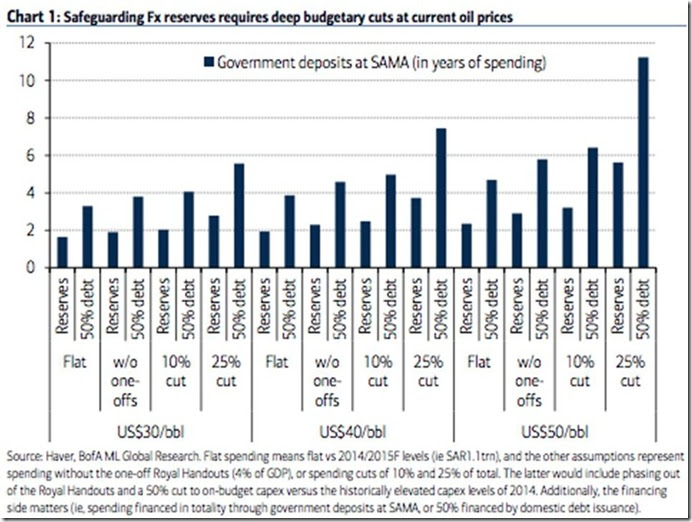 Now, all this is important because American frackers, and probably many of the banks that finance them, have been operating under the impression that the Saudis are up against the wall financially and ready to collapse.   Over the past year, some version of the "Saudis need $100 oil to break even" story, which originated with the IMF, has been regularly reported in the mainstream and financial press, which has encouraged the frackers, and the banks that lend to them, to try to hold out just a bit longer, after which time they believe the Saudis and OPEC would relent and push oil prices higher, saving their skins.  Over this period, we've seen that most frackers lost money when oil was a $60 in the second quarter, and some even lost more than their revenues with with oil at $50 in the 3rd quarter, meaning they'd need to more than double revenues just to break even.  That the Saudis are engaging in deep budget cuts that will impact everyone and every business in the country now shows that they are planning for oil prices to be priced low for quite a long time.  Some may think these cuts will bring about some kind of Arab spring type revolution in this Middle East kingdom, but we feel that's unlikely; oil prices have only been over $40 a barrel for the last dozen years, so except for the very young, most of the Saudi citizens have spent most of their lives living within the means that $40 oil provides the country.  Most of the frackers, on the other hand, have never seen real hardship; and very few have experienced a true oil bust, like we saw in 1986, when oil fell to $7 a barrel in a similar Saudi imposed global oil glut.  If American oilmen were a bit more visionary and had a longer term outlook, they would have seen what is going on, and would have pulled back long before it came to this...

Note: the above was excerpted from Focus on Fracking..