I don't think anyone saw this one coming.


(Bloomberg) -- Dubai shook investor confidence across the Persian Gulf after its proposal to delay debt payments risked triggering the biggest sovereign default since Argentina in 2001.


Gulf region default swaps jumped, with contracts linked to Bahrain adding 29 basis points today to 223.5, the biggest increase since Feb. 18. Contracts linked to Abu Dhabi added the most since February yesterday, climbing 36 basis points to 136.5 and were another 23 basis points higher at 159.5 today, according to London-based CMA. Qatar default swaps rose 13 basis points to 117, adding to yesterday’s 11 basis-point increase.
“Dubai is the most indicative of the huge global liquidity boom and now in the aftermath there will be further defaults to come in emerging markets and globally,” said Nick Chamie, head of emerging-market research at Toronto-based RBC Capital Markets.

This is especially effecting the european markets.

I put that in the subject because I read this yesterday but thought it was just a state owned large construction project, not the entire nation, so I didn't post it.

How many "Modern Marvels" and "Discovery" shows have we seen on Dubai and they are loaded with oil. So this is truly amazing.

Doesn't Islam has rules about debt too, so I would imagine that's even more reverberating about the "evils of the West".

Interesting story, indeed.
A nation supported by the uber-wealthy defaulting?
Not a good sign.

to have some fun on Thanksgiving. See last blog post.

The models claim no one will collect on these little insurance policies and we haven't done a damn thing to regulate them.

What are we looking at here, not just a "double dip" but a triple bomb?

Some may remember this article which I linked to in a blog post last spring. If not, it's worth revisiting it now.

The thing about Dubai is that it is the 2nd largest of the 7 emirate states which make up the UAE. Yet, almost none of the oil reserves are located in Dubai. The richest deposits are in Abu Dhabi. But Dubai is uniquely located on the Persian Gulf and Sheikh Al-Mahtoum was perhaps the most visionary of the sheikhs in the UAE. He established the most socially liberal emirate state and attracted enormous investments from everywhere. Dubai is also a major transshipment point for world trade. I believe that around 1999, something like 35% of all international trade went through Jebel Ali Port in Dubai. The growth was breathtaking and the level of decadence was unprecendented, maybe throughout the history of mankind.

Several weeks ago I saw a post somewhere that showed an aerial view of Dubai sometime in the 1990s and then again a few years later. I'll look back through my history to see if I can find it, then you will have some appreciation for what has happened in Dubai. I was there twice and it is beyond words for me to try to describe it. But for sure, this debt payment default is a serious concern. They say that the bigger they are, the harder they fall. A Dubai default might be a bigger deal than Bear Stearns.

A sovereign default is deadly serious due to contagion and that's regardless of their world contributions. The fact Dubai has such a lock on oil, markets I can only imagine this would be much worse than 1998, Russia.

Esp. considering how fragile the global economy is right now.

The pictures were posted at Sudden Debt earlier this month and they are truly dramatic.

Here is the link for a view from the same spot taken in 2008:

Finally, this link shows what Dubai looks like today from space:

The HTML is over in the user guide and to find the actual image, right click on the image in firefox and say "copy the image location" and that will give you the link. 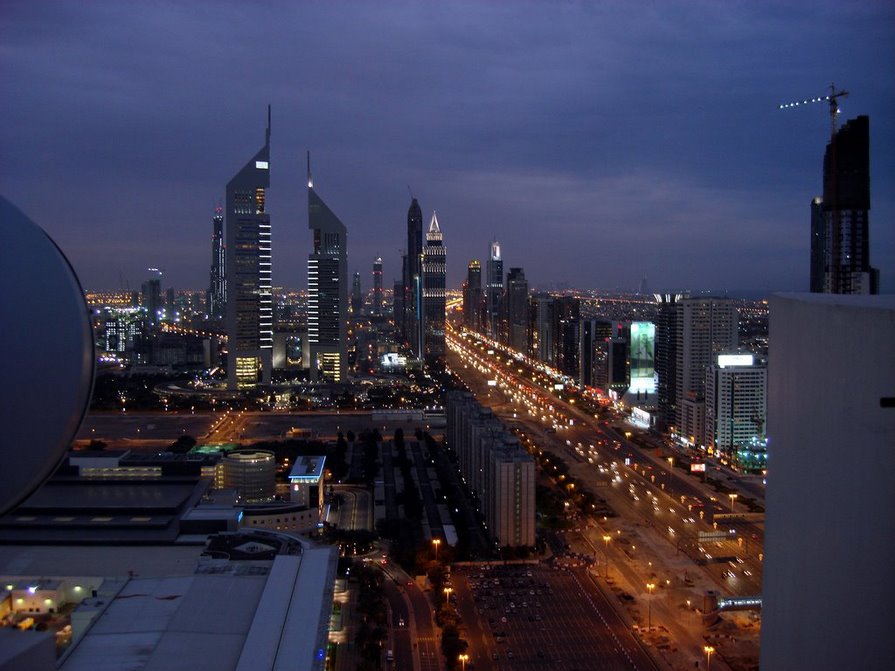 You need to format it with the IMG tag, see the user guide, right hand side.

I think my original comment was being typed at the same time your blog post was being written. After that, I just looked for the old images I had seen without checking for new updates or posts here.

Also, I used html code to publish the photos but when I previewed, they came up as dead links. My son, who is very proficient in html and does a lot of website design, is visiting for the holiday. I showed him my code and he couldn't see anything wrong. Yet, the photos would not display. So, I just posted the links and then hurried to help out with the holiday feast.

I hope that you know that I really try to publish posts and comments that "look good" and use proper grammar and spelling. I still don't know why the links didn't just appear as the photos. I agree with you, well formatted and displayed posts are much more enjoyable to read.

If you try to link to the image directly it doesn't display, but if you right click on the image, you get the real URL for the image that works.

I found that out "borrowing" some Calculated Risk graphs on housing.

Over on Zero Hedge they are showing already contagion happening around the globe.

I wrote about contagion and reference it often...

yet another "they have no frickin' clue" on how national economies, global markets interact.

I just love this shit. They architect, against the will of most nations, this grand globalization scheme and they have no idea how it really all interacts. Way to go Rubin and proteges!

is that there is nothing like the concept of bankruptcy in local law, as an article from this spring talking about a Western expats experience explained it:

"It was an adult Disneyland, where Sheikh Mohammed is the mouse," she says. "Life was fantastic. You had these amazing big apartments, you had a whole army of your own staff, you pay no taxes at all. It seemed like everyone was a CEO. We were partying the whole time."....

"Before I came here, I didn't know anything about Dubai law. I assumed if all these big companies come here, it must be pretty like Canada's or any other liberal democracy's," she says. Nobody told her there is no concept of bankruptcy. If you get into debt and you can't pay, you go to prison.

Do you suppose that this means that they'll now put the Emir into prison? The entire country.

Oh, global markets crashing. Who is next - Iceland, Latvia? Great, I think I'll back to my turkey snooze.

Things must surely be under control. If Bernanke has some arcane speech to some club this weekend, I imagine he will announce that the Federal Reserve is establishing a new facility to buy these securities and expand the Fed balance sheet accordingly. He will probably say that he is confident the Dubai debt will be rated AAA by a rating agency somewhere.
Frank T.

Over on my blog, I commented this morning about how Citi and Goldman hold about $2.5 billion in UAE debt and how fast Bernanke and Geithner will start making noise about having to step in. And when this first blipped on my radar Wednesday, I thought, "Wow, Austria 1931."

Then there is the effect on the $123 billion in debt held by foreign banks. $50 billion is held by UK banks, notably HSBC, Standard Chartered, Barclays, and RBS, but there is plenty to go around. BNP Paribas holds about $1.7 billion, Citigroup $1.9 billion, and Goldman Sachs a mere $600 million. Any bets on how fast this ends up on the books of US and UK taxpayers?

Economist Brad Delong mentioned Austria 1931 almost immediately on his blog as well. I considered reposting an article I wrote a while ago on contagion.

Citigroup is already singled out by COP, overview and report here, as to "what the hell is going on" in so many words with their real health. It was claimed they passed the latest stress test.

Citigroup could lose still $34 Billion, so I imagine Geithner will come immediately to Citigroup and Dubai's rescue. ;)

What I would like to know at this point is does Dubai imply high probability of sovereign default. Then, I'm wondering about comparisons to Russia, Thailand (another real estate bubble). But when those events happened the world was not so globalized and not nearly as vulnerable.

If they are holding $2.5 billion in Dubai obligations, this is hardly TBTF risk. Let them eat it -- take it out of next year's bonuses.
Frank T.

and have them pay for Citigroup's loss too.

Note there are a ton of CDSes associated with Dubai and it's very unclear what type and who is holding the bag.

BTW: Derivatives reform, which is probably the most critical of all financial reforms, is getting thrown under a bus last I checked.