The NAR reported existing home sales declined -1.9% from last month and are up 10.7% from last year.  Sales have increased on a yearly basis for the last 27 months in a row.   Inventories are still a very tight five months of supply.  Inventories increased 2.0% from last month but are down, -7.4% from a year ago.   Existing homes sales nationwide have increased 10.7% from a year ago.  Volume was an annualized and seasonally adjusted 5.29 million for September 2013. 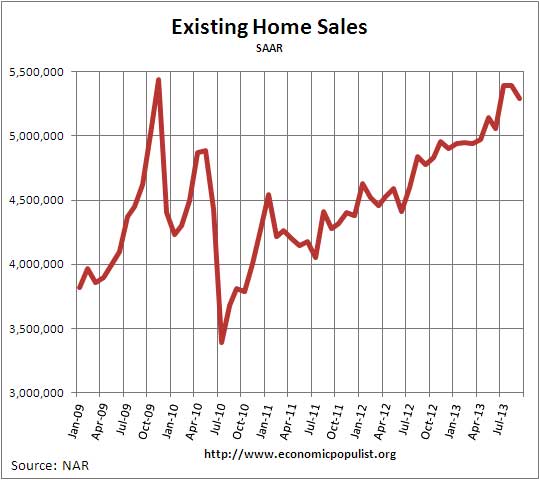 The national median existing home sales price, all types, is $199,200, a 11.7% increase from a year ago.  Median price has seen double digit annual increases for the last 10 months.  Below is a graph of the median price.  One needs to compare prices only a year ago for increases due to the monthly ups and downs in prices associated with the seasons. 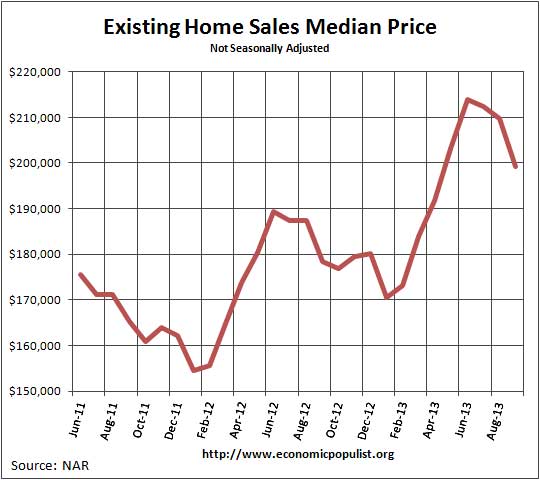 The average home price for September was $247,400, a 9.2% annual increase.  The bubble like price increases that may very well have much to do with the Federal Reserve mortgage backed securities purchases, known as quantitative easing.  Yet, mortgages rates have increased.  According to NAR a 30 year fixed mortgage was 4.49% interest and not this high since July's 4.55% rate.  The higher the mortgage rate the less home one can afford.  This is why NAR proclaimed existing homes are now becoming out of reach again for most Americans;

Some of the hardest hit areas by the housing bubble and recession are now on fire for home prices.  Detroit is up 44.6%; Las Vegas, increased 30.7%t; and Sacramento region are up 28.9% from a year ago in their for sale list prices.

Distressed home sales are basically over with foreclosures and short sales being 14%, a full 2 percentage points higher than August's figures, yet August distressed home sales were the lowest since October 2008.  The decline in distressed sales is one reason the median price of existing homes is soaring.

Yet all cash buyers are still high with 33% of sales being all cash.  NAR reports individual investors are clearly still around, purchasing 19% of the existing homes.  First time home buyers were 28% of the sales and this is a four percentage point decrease from the previous month.

The median time for a home to be on the market was 50 days.  Those are bubble year time lines to sell a house.  In September 2012 the median time an existing home was for sale was 70 days.

According to RealtyTrac, foreclosures are down 27% from a year ago and much of the reason is robo-signing was stopped.

Existing-home sales in the West rose 1.6 percent to a pace of 1.25 million in September, and are 7.8 percent higher than a year ago. With ongoing inventory restrictions, the median price in the West rose to $286,300, which is 16.8 percent above September 2012.

Here are our overviews of existing home sales not revised.  Even NAR is reporting the government shutdown will affect their own housing statistics.  The effects on economic statistical releases due to raw data gathering being stopped and now delayed is expected to last for months.