The FHFA just pooped on half a million Americans and denied those underwater on their mortgage to obtain partial debt forgiveness. Millions of American homeowners holding out hope are outraged. Acting FHFA director Ed DeMarco:

Today, I provided a response to numerous congressional inquiries as to whether the Federal Housing Finance Agency (FHFA) would direct Fannie Mae and Freddie Mac to implement the Home Affordable Modification Program Principal Reduction Alternative (HAMP PRA). After extensive analysis of the revised HAMP PRA, including the determination by the Treasury Department to begin using Troubled Asset Relief Program (TARP) monies to make incentive payments to Fannie Mae and Freddie Mac, FHFA has concluded that the anticipated benefits do not outweigh the costs and risks.

Given our multiple responsibilities to conserve the assets of Fannie Mae and Freddie Mac, maximize assistance to homeowners to avoid foreclosures, and minimize the expense of such assistance to taxpayers, FHFA concluded that HAMP PRA did not clearly improve foreclosure avoidance while reducing costs to taxpayers relative to the approaches in place today.

I have also previewed for Congress several housing-related initiatives to strengthen the loss mitigation and borrower assistance efforts of Fannie Mae and Freddie Mac as well as improve the operation of the housing finance market. These initiatives include new and consistent policies for lender representations and warranties, alignment and simplification of the Enterprise short sales programs, and further enhancements for borrowers looking to refinance their mortgages.

The response is furious with Paul Krugman leading the charge:

The Treasury department had offered 63¢ on the dollar to back a mortgage debt relief request. The FHFA controls Feddie Mac and Fannie Mae. So, in other words, not only did the FHFA poop on homeowners, DeMarco literally crapped on his own boss, President Barack Obama. Bloomberg overviews how absurd this by quoting the FHFA's own study:

The most mind-boggling aspect is that FHFA's own analysis shows principal reduction would save the taxpayer-backed mortgage giants as much as $3.6 billion compared with other modification efforts. It would also prevent broader damage to the housing market by helping as many as 500,000 borrowers in danger of default.

Even Forbes, that bastion of corporate generated financial news cried even BoA is doing credit write downs on mortgages:

Bank Of America Is Reducing Mortgages--Why Won't Freddie And Fannie?

There are currently 11.1 million homeowners who owe more on their mortgage than their home is worth. Should the government step in and help these underwater homeowners?

Naked Capitalism says it's tough to get rid of this guy and blames the Obama administration for not giving a rats ass about homeowners in the first place. Even the GAO said HAMP was hopeless in so many words.

To replace DeMarco at this juncture would be waving a red flag in front of Fannie and Freddie hating Republicans, and would bolster Romney’s campaign by giving them a solid anti-Obama talking point. And the reality, as we indicated above, is that Obama has never been serious about helping homeowners. He’s never crossed swords with the folks who demonize borrowers in distress, never had any of his minions get tough with recalcitrant servicers. He has plenty of latitude to make an impact, and the only thing he threw his weight behind was the cosmetic, bank-serving mortgage settlement. He’s clearly made the calculation, and he has determined he is well served with DeMarco in place as a scapegoat.

But the Washington Post says oh yes Obama can:

Obama may not be able to fire DeMarco, but he sure can replace him. Here’s Levitin:

The FHFA statute provides that the FHFA Director is only removable “for cause”. 12 U.S. Code sec. 4512. That sort of provision usually means that the President can only remove the officer for malfeasance or misconduct, not just a policy disagreement. (See In re Humphrey’s Executor.).
DeMarco, however, is an Acting Director…This means he can be removed at any time simply by the Presidential appointment of a Director. That would require Senate confirmation (not happening before 2013 under political realities and the ridiculous Strom Thurmond rule) or a recess appointment (possible). Given the way Obama has interpreted the recess appointment power for the CFPB Director and NLRB appointments earlier this year, the ability to do a recess appointment means he can replace DeMarco pretty much whenever he wants.

There are caveats. DeMarco is civil service, and so can only be moved, not fired outright. And Levitin notes that replacing him means Obama can’t blame DeMarco for the state of the housing sector. But Obama could have a new FHFA director whenever he wants one.

It looks like Treasury has also declared war on DeMarco. Earlier Geithner wrote a letter, which is partially quoted below. Note how Geithner concedes this is the FHFA's decision.

I am writing in response to the decisions announced in your letter to Congress today. While I was encouraged that the Federal Housing Finance Agency (FHFA) is making progress on some initiatives we have discussed that will help the housing market recover, I am concerned by your continued opposition to allowing Fannie Mae and Freddie Mac (GSEs) to use targeted principal reduction in their loan modification programs.

FHFA is an independent federal agency, and I recognize that, as its Acting Director, you have the sole legal authority to make this decision. However, I do not believe it is the best decision for the country, because, as we have discussed many times, the use of targeted principal reduction by the GSEs would provide much needed help to a significant number of troubled homeowners, help repair the nation’s housing market, and result in a net benefit to taxpayers.

Indeed, notwithstanding the selective numbers cited in your letter, FHFA’s own analysis, which you have shared with us previously, has shown that permitting the GSEs to participate in the Principal Reduction Alternative program (HAMP-PRA) could help up to half a million homeowners and result in savings to the GSEs of $3.6 billion compared to standard GSE loan modifications. Furthermore, if the GSEs were to participate in HAMP-PRA, taxpayers would save as much as $1 billion on a net basis. In view of the clear benefits that the use of principal reduction by the GSEs would have for homeowners, the housing market, and taxpayers, I urge you to reconsider this decision.

Of course many in the Bankster and investor class are happy. They could care less if millions have lost their homes. 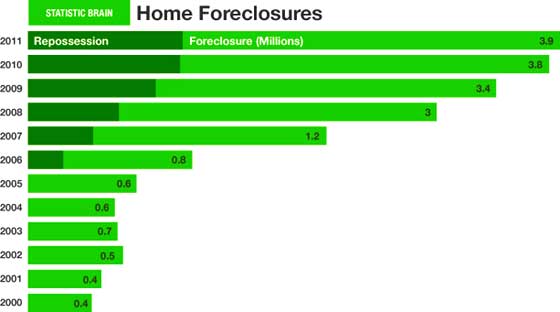 RealtyTrac reported foreclosures increased in the first half of 2012.

Foreclosure activity in the first half of 2012 increased from the previous six months in 125 of the nation’s 212 metropolitan areas with a population of 200,000 or more. Despite the increases from the second half of 2011, 129 of the metro areas still posted year-over-year decreases in foreclosure activity.

So America, no credit write downs for you although in America's middle class misery at least we all can watch Washington D.C. burn themselves down by firebombing each other. Unfortunately of course, the middle class is their cannon fodder.