Another month, another record deficit.


WASHINGTON - The U.S. government deficit hit a record for October as the new budget year began where the old one ended, with the government awash in red ink.
The Treasury Department says the deficit for October totaled $176.4 billion, even higher than the $150 billion imbalance that economists expected.
The deficit for the 2009 budget year, which ended on Sept. 30, set an all-time record in dollar terms of $1.42 trillion. That was $958 billion above the 2008 deficit, the previous record holder.

And yet there are still people out there that say we didn't spend enough on the stimulus.

There, I said it. It's not that the Stimulus by itself was a bad idea, it's not. It's clear to me Keynesian stimulus does work.

The problem is how it was directed. They refused, simply refused to tie the money to income. Into the pockets of U.S. workers, into the domestic economy and providing jobs, income for U.S. workers.

That's what's wrong with it. I said at the time and I'll say it again, unless my mathematics ability leaves me on outer space, the Keynesian formula clearly shows government spending must be 1. put into the pockets of citizens in some fashion that also generates work/production 2. stays within the domestic economy that a government is responsible for.

Even of the little money supposedly to generate jobs....a lot has been offshore outsourced, they used a no-bid contract system....the same as Iraq, so we know there is waste, corruption and probably not the max. if any U.S. workers hired....and that money was also way too small.

i.e. they needed a jobs program from the get go, a real one.

Now we have record unemployment with record deficits. Awesome.

and they wonder why the Tea Parties and those proclaiming low taxes and smaller government is such a movement. Of course it is because the government just gives money away to lobbyists and their clients...it's not using U.S. taxpayer money in the national interest and it's also not efficient. Who wants a government like this?

but I certainly understand the conservatives under these circumstances.

Jobs were sacrificed in the interest of bipartisanship and moderation. It had to bold and innovative - it was neither. Now, we are left with the mess.

I also believe that Keynesian counter-cyclical polices can work but this poor example will doom Keynesian economics for another 30 years.

As for teabaggers, the people doing the protesting may have a point but the people behind the scenes particularly people like Dick Armey help create this mess the lead to the financial oligarchy bailout and this lame ass stimulus plan.

On Openleft, Chris Bowers was asking why not use TARP money for a WPA-type program. I said the proper question is 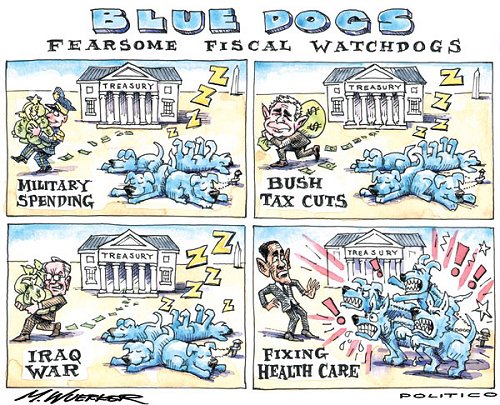 Add to that the over $100 billion and climbing for war in Afghanistan.

I'm working through a book I will review which touches upon war profiteering as an economic activity in the U.S.

Every the more reason EP is needed too. We "follow the money" and get into the details vs. just "grab" some partisan sound byte and say "yeah, me too".

no-bid contracts, all of the big money end of war (try to stay away from actual foreign policy) but all of the "follow the money" sorts of activities like Halliburton, corruptions, waste, all of the money end of this is appropriate for EP.

Anything involving finance, money is because it affects the U.S. budget, affects Domestic economy.

Just a FYI if you're following The Nation's expose on the latest with war profiteering, corruption.

Some conservative democrats and a few repuglicans have decided that they can't do their jobs in terms of crafting a federal budget so they want to outsource that to an independent commission who would:

Among its chief responsibilities would be closing the gap between tax revenue coming in and the larger cost of paying for Social Security, Medicare and Medicaid benefits. The Government Accountability Office recently reported the gap is on pace to reach an "unsustainable" $63 trillion in 2083.

Why are they targeting social security, medicare and medicaid? Why not corporate subsidies, tax loopholes and tax code preference for debt? Why because they want to privatize the shit out of social security?

Ignoring the constitutionality of this for a second, I have a suggestion get the fu*king big ass money out of Washington and hey elected officials in Washington - do your fu*king job!

They have a great series that once and for all puts this entire agenda to privatize SS to bed.

But, believe it or not, David Walker (Peterson Foundation) has admitted many times SS is not the real issue and is easily fixed by removing the regressivity of the tax.

I saw a blurb fly by on corporate tax code reform possibly by Congress.

Now you want to talk about major homework assignments for us...that's when it really gets intense to review legislation.

BTW! Is anyone here trying to read the Dodd Financial reform draft!

Seriously! If people want real reform, you gotta dig in, whip out that college cram session mentality and try it.

Why do we need them if they want to outsource one of their key responsibilities as a member of legislative branch?

I get more angry. We have young man and woman making the ultimate sacrifice for us and these chick shit senators can't do one of the most important jobs they elected to do.

This is complete bullsh*t. They should hounded out of office for even proposing such a cowardly act.

is just a money and campaign fest. A lot of their bills are written by corporate lobbyists, literally handed to them, all "done for them".

There are real legislative staffers, etc. who write legislation but seemingly the crap that comes up for a vote...is written by corporate lobbyists.

I think we need a deep breath and public financing of campaigns and a ban on lobbyists.

It's just so corrupt, they simply refuse to act on behalf of their constituents or the national interest.

I hear ya on frustration, but even on the left the big money often goes to issues and campaigns that frankly aren't that effective. We need to get corporations out of D.C. and both sides need to join forces to get representative government back.