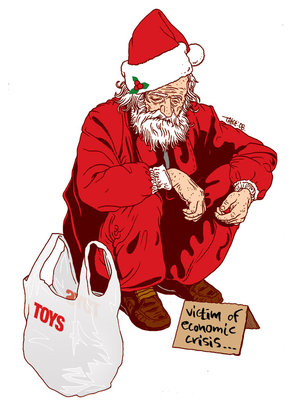 Ho Ho Ho and Happy Holidays! It's Christmas, the time of layoffs, of getting kicked out of your home and watching television commercials reminding you of all the stuff you cannot afford. It is surely a time of torture through Christmas music. Your kids need shoes and you can't find a job. Seasons Greetings! You better watch out and better not cry, below are stories that....

Hark the Herald Angels Sing, Glory to the Newborn King, we have Bank of America stealing a widow husband's ashes off the mantle.

When Mimi Ash arrived at her mountain chalet here for a weekend ski trip, she discovered that someone had broken into the home and changed the locks.

When she finally got into the house, it was empty. All of her possessions were gone: furniture, her son’s ski medals, winter clothes and family photos. Also missing was a wooden box, its top inscribed with the words “Together Forever,” that contained the ashes of her late husband, Robert.

The culprit, Ms. Ash soon learned, was not a burglar but her bank. According to a federal lawsuit filed in October by Ms. Ash, Bank of America had wrongfully foreclosed on her house and thrown out her belongings, without alerting Ms. Ash beforehand.

Have yourself a Merry Little Christmas, banks are increasing credit card interest rates and charging fees for checking.

Let There Be Peace On Earth...., many U.S. business are working with terrorist nations in spite of official trade sanctions.

At the behest of a host of companies — from Kraft Food and Pepsi to some of the nation’s largest banks — a little-known office of the Treasury Department has granted nearly 10,000 licenses for deals involving countries that have been cast into economic purgatory, beyond the reach of American business.

Most of the licenses were approved under a decade-old law mandating that agricultural and medical humanitarian aid be exempted from sanctions. But the law, pushed by the farm lobby and other industry groups, was written so broadly that allowable humanitarian aid has included cigarettes, Wrigley’s gum, Louisiana hot sauce, weight-loss remedies, body-building supplements and sports rehabilitation equipment sold to the institute that trains Iran’s Olympic athletes.

In one instance, an American company was permitted to bid on a pipeline job that would have helped Iran sell natural gas to Europe, even though the United States opposes such projects. Several other American businesses were permitted to deal with foreign companies believed to be involved in terrorism or weapons proliferation. In one such case, involving equipment bought by a medical waste disposal plant in Hawaii, the government was preparing to deny the license until an influential politician intervened.

O Holy Night, the Working Poor Families Project reports 30% of those working are really in poverty:

Oh Come all ye faithful, a new report shows homelessness in cities has increased 9% in the past year, with 58 cities reporting increases.

Do you hear what I hear, a piece on Obama's Federal Reserve chair nomination, Peter Diamond's background, who is getting blocked by Senator Shelby.

I'm Dreaming of a White Christmas and people age 75 and over are working, a good 7.4% of them. On top of it, many cannot find a job, the unemployment rate for those looking at age 75 and over is 5.7%.

Sifting through the data from the Bureau of Labor Statistics, AARP analysts found that the number of workers ages 75 and older (meaning they’re employed or seeking employment) has grown to about 1.3 million in 2009, from just under half a million in 1989. That’s still a small sliver of the population over age 75, just 7.3 percent, but a big jump from the 1989 labor force participation rate of 4.3 percent.

We know that a growing proportion of this work force, almost 44 percent, are women. And a just-released Census Bureau report adds this surprising fact: of workers ages 75 to 84, more than 42 percent hold full-time jobs.

Moreover, hundreds of thousands of people over age 75 want to work and can’t; their unemployment rate has shot up to 5.7 percent. But the year-to-year federal figures show that to be largely a product of the last two recessionary years; more typically, it hovers around 3 percent.

On the Twelfth Day of Christmas, my true love sent to super rich me, another tax break. EPI calculates the rich got richer, 225 median times worth.

Ah, the most wonderful time of the year! Joy to the World.

Xmas cheer I've had! I'm ready to relax and enjoy the holidays;)

The VERY BEST to the best of the blogs!

And here's 29 seconds that explains what peopole mean when they say that we're lead by fools.

It's simple, the government and big biz want you to work until you die. Several stragegies they use for making this happen:

- Increase the Social Security retirement age.
- Inflation. Destroy older workers savings with policies that promote inflation.
- Encourage debt. Those in debt must keep working until they pay it off.
- Keep the cost of health care and insurance high. Can't retire if you can't pay your medical bills.
- Increase the cost of housing. It's difficult to retire if your house isn't paid off.
- Increase property taxes. Even if your house is paid off, rising property tax rates will force you to work until you die.

Why would the U.S. government want you to work until you die? Because their campaign contributors, big biz, want it.

financial situation like Greece? I agree encourage of debt creation needs to stop!