It is 2013. Five years after the start of a recession and two and a half years after so called financial reform legislation was passed. Yet, Too Big To Fail Banks have just gotten bigger, the financial system is still at risk and most of the disaster was buried in a mountain of bail out money.

Enter Dallas Federal Reserve President Richard Fisher. Mr. Fisher gave a speech in Washington with the not so subtle title Ending 'Too Big to Fail': A Proposal for Reform Before It's Too Late.

From the opening revolutionary salvo, Fisher makes it clear true financial reform has still not been addressed.

Tonight, I wish to speak to a different kind of repression—the injustice of being held hostage to large financial institutions considered “too big to fail,” or TBTF for short.

I submit that these institutions, as a result of their privileged status, exact an unfair tax upon the American people. Moreover, they interfere with the transmission of monetary policy and inhibit the advancement of our nation’s economic prosperity.

Fisher also blasts the Dodd-Frank financial reform bill, as we have many, many times.

We contend that Dodd–Frank has not done enough to corral TBTF banks and that, on balance, the act has made things worse, not better.

Just like income inequality in the United States there are also the haves and the have nots in the banking world.  Fisher notes the TBTF banks control 69% of the sector and just like the uber-rich play by different rules than the 99%, the same is true for banks. 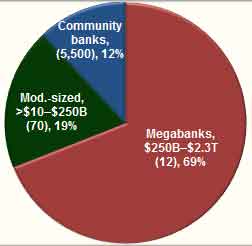 The result of mega banks causing contagion and systemic risk means creditors to the bank know there is no way in hell governments will let them actually fail.  That implicit government guarantee results in a massive subsidy to mega-banks in the form of lower costs. Fisher:

Unsecured creditors recognize the implicit government guarantee of TBTF banks’ liabilities.   As a result, unsecured depositors and creditors offer their funds at a lower cost to TBTF banks than to mid-sized and regional banks that face the risk of failure.   This TBTF subsidy is quite large and has risen following the financial crisis.

Recent estimates by the Bank for International Settlements, for example, suggest that the implicit government guarantee provides the largest U.S. Bank Holding Companies with an average credit rating uplift of more than two notches, thereby lowering average funding costs a full percentage point relative to their smaller competitors.   Our aforementioned friend from the Bank of England, Andrew Haldane, estimates the current implicit TBTF global subsidy to be roughly $300 billion per year for the 29 global institutions identified by the Financial Stability Board (2011) as “systemically important.”   To put that $300 billion estimated annual subsidy in perspective, all the U.S. BHCs summed together reported 2011 earnings of $108 billion.

Fisher's proposal is to simply break up the banks so they do not pose such risk to the global financial system.  They propose offering a government backed safety net to only traditional banking and the rest well, reduce their size and make it clear they are on their own.

The shadow banking activities of financial institutions must not receive taxpayer support.

TBTF institutions are not just regular traditional banking. They have many other activities including SPVs, or affiliates, and should be classified as holding companies.   Fisher proposes this part of TBTF banks needs to be broken up and separated from traditional banking.

The TBTF Bank Holding Companies may need to be downsized and restructured so that the safety-net-supported commercial banking part of the holding company can be effectively disciplined by regulators and market forces.   And there will likely have to be additional restrictions (or possibly prohibitions) on the ability to move assets or liabilities from a shadow banking affiliate to a banking affiliate within the holding company

Fisher is really presenting Glass-Steagall 2.0 after years of research and analysis of the banking system.  Too Big To Fail Means Too Big To Exist. Fisher's proposal is that simple and would save us all from the financial reform that was passed in 2010.  Dodd-Frank is growing daily and last tally was over 9,000 pages of new rules.  As Fisher notes, that's quite burdensome on any smaller bank and the only redeeming quality to such a maze of legalize is the stimulative attorney and corporate CPA employment program required to navigate through such a regulation Medusa.

We suggest you read the speech in full.  It's well done, illustrated, referenced and a very common sense proposal. Simply restructure the shadow banking system where shadow banking is redefined as anything outside traditional commercial banking and kill TBTF outright.