A report from the Bureau of Labor Statistics titled Comparing benefit costs for full- and part-time workers says, "Health insurance appears to be the only benefit representing a true quasi-fixed cost to employers, meaning that the cost per hour worked is greater for part-time employees than it is for full-time employees." 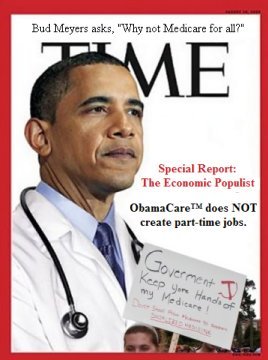 March of 2010 was when President Barack Obama signed the Affordable Care Act. Million of jobs had already been lost long before ObamaCare™ had even passed Congress, and years before a mandate was ever to be implemented. Temp and part-time hiring has been going on for the past 5 years, but now business leaders and their pundits are saying that it's because of ObamaCare™ that this has been happening.

In the past, whenever we had a slowdown in hiring, they would also blame the minimum wage, the Equal Employment Opportunity Commission (EEOC), the AFL-CIO and other labor unions, the Occupational Safety and Health Administration (OSHA), the National Labor Relations Board (NLRB), the various other consumer protection agencies, the Environmental Protection Agency (EPA), corporate taxes, the cost of energy, natural disasters and the weather.

These business interests have always had some reason for not paying workers fairly and offering them reasonable benefits. That's why wealth inequality in the U.S. is worse than in most developed countries. Now ObamaCare™ is just another one on their long list of excuses for not hiring. The same excuses they always use for offshoring jobs, replacing workers with automation, advocating for "right to work" laws, using jobs as hostages while negotiating tax breaks, busting labor unions and using H-1B visas to import labor...to stuff extra cash into the bottomless pockets of the corporate executives at the expense of those who are already barely getting by. Social Security reports that 50% of all American workers net $27,000 a year or less --- and according to a Gallop poll, less than half of those had employer-based healthcare coverage.

Recently in the New York Times Casey B. Mulligan writes, "The Affordable Care Act’s employer mandate will eventually levy a penalty on large employers that do not offer affordable health insurance to their full-time employees. Employers have been complaining about the penalty, saying it will reduce the number of people they hire and cause them to reduce employee hours."

So does that mean that if a company like Boeing received an order for a ten 787 Dreamerliners tomorrow, and the customer wanted them all delivered by the end of the year, Boeing would cut hours and not hire anyone (and be late with the delivery) just because Boeing would have to pay an employer mandate for ObamaCare™ next year?

And then in another article by Casey B. Mulligan he writes, "Because part-time workers will be eligible for the subsidies, except in the rare instances in which their employer covers them, full-time work will no longer carry the advantage of access to health insurance. That by itself will encourage more people to seek part-time work." Is he kidding me?

Annie Lowrey, in another New York Times piece, writes, "The June jobs report saw a surge in part-time workers, and the health care law that starts coming into full effect next year might be in part responsible."

Everybody at the New York Times (not to mention Fox News and all the conservative websites) seems to think that ObamaCare™ is causing all the temporary and part-time jobs.

A few days ago the Center for Public Integrity wrote, "According to the Kaiser Family Foundation, 98 percent of companies with 200 or more workers provide [healthcare] coverage, and 94 percent of those with 50-199 workers do. This means that the part of the reform law the administration is postponing until 2015 — the requirement that employers with 50 or more workers offer coverage — affects only a very small percentage of companies --- between 1 million and 1.5 million people."

The reality is, since the Great Recession, employers have learned to do more with less...and cutting payroll was their major cost cutter...long before a mandate for ObamaCare™ was ever to be implemented. This has been going on long before ObamaCare™ was even a twinkle in your daddy's eye.

And remember, the cost of hiring new employees is also tax deductible too. A tax advocacy group says Facebook (which made $1 billion in U.S. profit before taxes last year) will pay no U.S. income tax for 2012. That's because of the sizable tax deduction from stock options that companies like Facebook issues to its corporate executives. Stock options, like regular cash salaries, are tax-deductible for companies.

While the fine for not providing healthcare coverage isn't tax-deductible, the Affordable Care Act does provide for a tax credit. And as Forbes has noted, employers have another loophole. Employers can avoid the strong penalty and gain eligibility for the weak penalty by offering “minimum essential coverage" or ‘skinny’ coverage.

In my humble opinion, ObamaCare™ isn't forcing most employers to hire part-time workers. Employers (like the executives at Facebook) just don't want to pay the 3.8% surtax for ObamaCare™ on their unearned "investment income" --- those millions of dollars that they rake in every year with capital gains on their stock options...paying a tax rate of 20%, which is lower than Warren Buffett's secretary --- and which is often less than their corporate tax rate as well.

Only in my humble opinion, ObamaCare™ has VERY LITTLE (if anything) to do with the additional hiring of more part-time or temp workers. Do we believe honestly that WITHOUT the healthcare mandate employers would suddenly start flooding the labor market with millions of permanent full-time jobs paying a living wage. Dream on!

Just two days ago both the Dow Jones and the S&P 500 broke another all-time record (again). The only thing that eliminating the healthcare mandate will accomplish is, allowing the corporate executives to stuff more cash into their bottomless pockets --- that's all.

Ah, the teamsters, good for them! The title is still very valid, Obamacare doesn't create part-time jobs in that employers have been using part-time to deny workers benefits since 1980 as a strategy. In other words, if anyone bothered to look at the trend, (see our CPS overviews), part-time has been steadily increasing and that trend is long before Obamacare.

Below is a graph of part-time workers as a ratio of total employed (CPS). 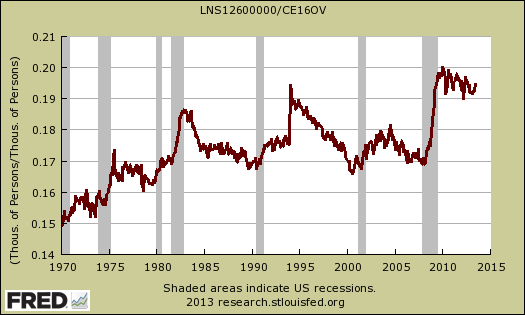 The real trend is those forced into part-time work when they need full time. Normally it is a recession indicator, but it has stayed mega high since 2008.

Below is a graph of those stuck in part-time jobs who need full time work and they are in part-time because that's all the hours they can get.   The graph is a ratio of those forced into part-time to the total employed (CPS). 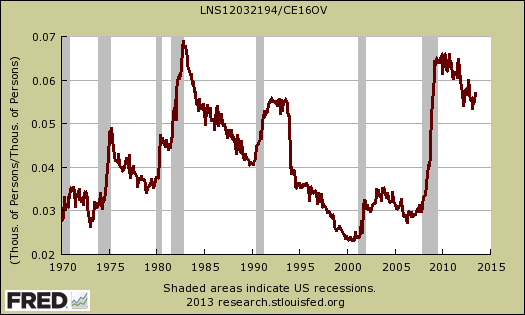 We see the trend line correlates to recessions until 2008 where it stays mega high.

It seems much more probable that this is due to the terrible economic conditions than blaming this sorely on Obamacare's < 50 employee, part-time exemptions.

Bud, I think you might be interested in this article, see here. It has the latest MEDIAN wages and distributions as reported by the SSA via tax records. (2011).

CEO pay has again risen to record levels, as more low-paying and part-time jobs (without benefits) are being created, while food stamps and unemployment benefits for those who are barely getting by are being cut. This generation of unemployed workers are already screwed. New skills will be needed by the next generation to create a new middle-class in America. The 4 articles below pretty much says it all:

New York Times: The median compensation of CEOs at 200 of the nation’s biggest public companies came in at $15.1 million last year, a 16 percent jump from 2011, according to Equilar, the executive compensation analysis firm. The pay packages — including salary, bonus, benefits, stock and option grants — ranged from $96.2 million at Oracle to $11.1 million at General Motors.

Wall Street Journal: Restaurants and bars have been adding an average of 50,000 jobs monthly since April—about double the rate from 2012. Overall, leisure-and-hospitality establishments hired more workers than any other industry in June, accounting for 75,000 of the 195,000 jobs added last month. A number of restaurants and other low-wage employers say they are increasing their staffs by hiring more part-time workers to reduce reliance on full-timers before the health-care law takes effect.

New York Times: Missing: The Food Stamp Program - “We’ll get to that later.” That was the dismissive answer of Speaker John Boehner on Thursday, when asked if the House would restore the food stamp program that it had just coldly ripped out of the farm bill. Republicans will deal with the nation’s most important anti-hunger program "later.” Maybe they will think about the needs of 47 million people who can’t afford adequate food --- by cutting the average daily subsidy of $4.39.

Dancing with Robots: Technology Skills of the Future - Manufacturing and other jobs in the U.S. will continue to be offshored to low-wage countries. In our new economy, the future of middle-class work will have to rely on uniquely human brain strength. The next generation of students will need to learn the foundational skills in problem-solving and communication --- skills that computers don’t have.

"Since the ACA does not require that part-timers are covered, with part-time defined as less than 30 hours/week, there’s an incentive to create part-time as opposed to full-time job slots. Of course, in terms of job counts, this incentive goes the other way—toward more job creation. It also, however, has the potential to lead to more involuntary part-time work."

I don't think Obamcare has anything to do with job creation but it sure does look correct that it can cause way more of those jobs to be part-time.

that said, it's not implemented yet and as I pointed out in the last employment overview, here, most of the jobs created are the most crappy, lowest paying ones and these are also the ones most likely to be part-time.

Bottom line, Obamacare is a mess and we should have universal single payer, that's not for profit, as other industrialized nations do.

All of these issues are no surprise since the health care industry and their profits, along with the insurance companies, were fundamentally protected at the expense of America.