People unemployed for 27 weeks or more remains at high levels of the total unemployed, 41.9%. That's 5.37 million people officially unemployed for over half a year, even though the percentage dropped 0.9 percentage points from May. Don't think this is that great of a sign, people are simply run out of unemployment benefits and then just drop out of being even counted as needing a job. Some are stuck in part-time because their hours were cut by their employer. These part-timers due to slack work now number 5,446,000, an increase of 299 thousand from last month. Below is a graph of forced part-time because they got their hours cut as a percentage of the total employed. If you want to see a recession economic indicator, this looks like a pretty damn strong one. See how closely the percentage increase matches recessions, the gray bars? The percentage of people in part-time jobs due to slack economic conditions has stayed extremely high since the start of the Great Recession. We need a few months of slack work, hours cut back increases to show yet another recession is looming. That said, take the below graph as an precipice indicator. U-6 is a broader measure of unemployment, includes the official unemployed, people stuck in part-time jobs and a subgroup not counted in the labor force but are available for work and looked in the last 12 months. U-6 has also remained consistently high and was 14.9% for June. The real number of people wanting a job for June is 27.5 million, over double the official counted as unemployed of 12.75 million. One needs to add up the official unemployed, people stuck in part-time who need full-time jobs, and all of those people not in the labor force, but who report they actually want a job, currently at 6.52 million. Those not counted in the labor force but report they actually want and need a job increased by 229 thousand from May. 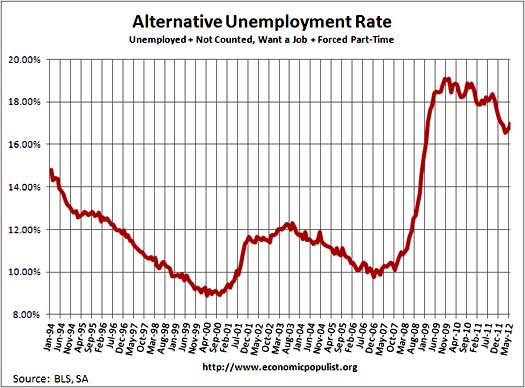 Even when people find a job in today's America, they are often short-term, terminable within a day's notice, contract jobs with no benefits. Good luck trying to date someone, marry someone, settle down in one town or city, lease a car, lease an apartment or buy a house, have a pet, or, dream a dream - have a kid or two that you might want to raise as a good American who would actually think politicians or their masters are anything but the lowest of the low, with these new "jobs." This has also been preplanned. The puppets in the media were prepping the populace with all the "benefits" of terminate on-site contract jobs for the last decade (what do you mean you can't make a livable income when you're competing with other freelancers willing to work for $2/hr.). Shockingly, those jobs always seem to benefit the manager or CEO, never the worker bees who must find someway to feed themselves when they are terminated with no notice. But temp agencies that post fake jobs and HR asshats and CEO dolts make $$$, and if you don't look 24/7 365 for these jobs and take them when offered - you must be just another "lazy American" (per MSM). Oh, by the way, if you don't accept these jobs, you will be forced to pay for an internship to gain experience so that one day you might work for $1/hr. after min. wages are eliminated.
Whatever you do, don't ask why someone would ever pay a worker if workers can be forced to work for free, DC and corporate America don't like questioning or intelligent citizens aka "smartasses" - thus the deemphasis on real education and real thinking.
The Grapes of Wrath was Nirvana compared to this crap. Tom Joad is coming back real soon and he is mighty pissed off. Good for Tom, I look forward to it, along with many, many other screwed over Americans.

Thanks for the great information and the charts. I always look forward to your analysis of the jobs numbers.

If anyone wants specific details on BLS data, please leave a comment. Unanswered question, observation? There is a lot of material to cover out of the BLS and then there is a huge problem with "missing" data, as well as the never ending problem of the CES and CPS differences. I'm curious to know what kind of unanswered details people want to know more about. Literally I could fill the site up with labor statistics graphs and one reason I have a tendency to ignore race statistics, esp. because those definitions are so "1960's". Today we need by immigration status. Because the BLS "Asian" statistics are front loaded with foreign guest workers and "Hispanics" are front loaded with illegals, about the only minority it's safe to bet are mostly U.S. citizens are "Blacks".