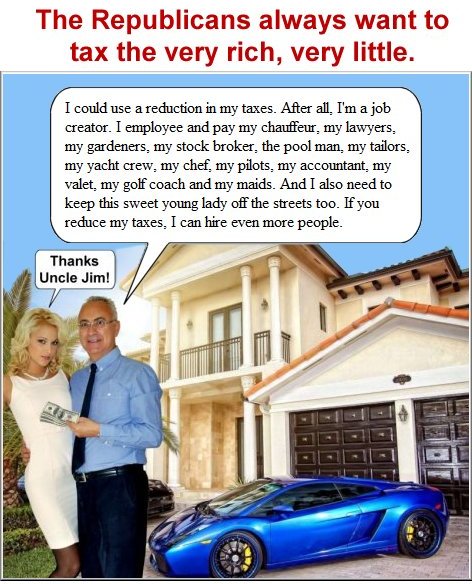 VOX did a study regarding high marginal tax rates of the top 1% (Follow the conversation here at Mark Thoma's blog in the comments section). They found that high marginal tax rates on the top 1% of earners can make society as a whole better off. Not knowing whether they would ever make it into the top 1%, but understanding it is very unlikely, most households (especially at younger ages) would happily accept a life that is somewhat better most of the time and significantly worse in the rare event they rise to the top 1%.

Conclusions from their study found that increasing tax rates at the very top of the income distribution, and thereby reducing tax burdens for the rest of the population, is a suitable measure to increase social welfare. As a side effect, it reduced both income and wealth inequality within the US population.

First, taxing the top 1% more heavily will most certainly not work if these people can engage in heavy tax avoidance, make use of extensive tax loopholes, or just leave the country in response to a tax increase at the top.

Second, the results of the study rely on a notion of how the top 1% became such high earners. In their model, "earnings superstars" are made from luck, coupled with labor effort.

Last, but not least, their analysis focused solely on the taxation of large labor earnings, rather than the capital income (capital gains) of the top 0.01%. We already have progressive marginal tax brackets. And nobody is going to deliberately earn less because their tax rate increases in the higher brackets — although, they might engage in more tax avoidance (e.g. tax attorneys, offshore banks, etc.)

Also — a $100 million painting, an ultra-expensive wine collection, an 18-acre beachfront mansion, precious stones, gold bars, coin collections, etc. (also known as SWAG investments) should also be taxed at the same rate as labor. Why should a higher value be placed on investments over labor? After all, it's usually labor that creates value and capital.

Deferred interest is another tax scam. David Cay Johnston writes: "Several dozen Americans, disclosure documents show, earn annual incomes of $1 billion or more. But they do not show up in the top 400 reports because Congress does not require them to report their full incomes or pay taxes immediately. For cash to live on these people typically borrow against their assets, paying interest rates of 2 percent or less."

Inheritances also perpetuates rising inequality: Why is an outsourcer such as Mitt Romney allowed to leave his sons $5 million tax-free, but a minimum- wage employee like a single mom at a local diner is taxed on all her meager tips?

Because income growth in recent decades has been so heavily concentrated at the very top, luxury markets have become the biggest drivers of economic activity around the world. This latest World Ultra Wealth Report notes that the very rich spends $1.1 million a year on luxury goods and services — and also owns 2.7 homes.

America’s youngest developer of luxury high rise residential real estate may soon be America’s richest developer of luxury high rise. Gil Dezer is teaming with Austria’s Porsche Design on a new 60-story ultra-luxury tower that's now being built in South Florida. After the new tower is completed in 2016, it will host 132 residents — with two to four cars per household all parked in “sky garages” right outside the condo's living rooms. Dezer has already racked up $600 million in sales for his new “Porsche Design Tower” and the future occupants (so far) include 22 billionaires. As he told the Miami Herald: “You don’t spend $5 million on a condo if you only have $15 million.” The tower’s four-story penthouse will run for $32.5 million.

Cadillac’s CEO is predicting that by 2029 his GM auto division will become a proud purveyor of ultra-luxury. “It is too early today for a $250,000 Cadillac,” de Nysschen opined last Wednesday in an interview at the annual Los Angeles auto show. “Fifteen years from now, it won’t be.” The current most expensive Cadillac retails at about $70,000, a pittance compared to automakers like Rolls Royce and Bentley, who are asking for a half a million or more for their cars. Cadillac sees this ultra-luxury market growing — and it wants in.

And things are really hopping for the luxury jeweler Fabergé. The company’s sales jumped 50 percent in 2014’s third quarter over the previous year. Fabergé’s top sellers are their rings in the company’s “Emotion Collection". Each $38,000 bauble sports a bedazzling array of 300 emeralds, sapphires, rubies, and diamonds.

Taxing the ultra-rich a little more is the only way to help level the playing field. But for a few voters, they still illogically and unreasonably believe that one day (in Nevereverland) they might also have a good chance of being ultra-rich; or think that by taxing their wealthy bosses more, they might be paid less than they already have been for the past 30 years.

You'll always hear the job creators complain that they'll have to lay off workers, hire less people, cut their employees' hours or charge customers more for their goods and services if they raise their employees' wages. But you'll never hear them admit that they'd have to buy one less private jet, sports car or 20-bedroom mansion. The money the ultra-rich save on low wages and low taxes is spent on conspicuous consumption (Veblen-goods) — and /or their extra cash is hoarded to be left to their trust-fund babies (who also perpetuates conspicuous consumption, while sometimes making silly "reality" TV shows).

And Uncle Jim is not just an ultra-rich "job creator", but he's also a pleasure-seeking sugar daddy — and that's another reason why we should tax his capital gains as ordinary wages. Call it a "sin tax" for avarice, greed, sloth, lust, envy, and gluttony. When Uncle Jim is allowed to avoid paying his fair share of taxes, he's also fleecing Uncle Sam.

But the Republicans, especially with their new Congress, may attempt to tax the top 0.01% even less. And with less tax revenues, the GOP will have more excuses to make additional budget cuts — especially for programs targeted for 95% of the working-class and the very poor.

"While I said I did not want to go into the details of the review, there was one that I found very surprising. The review argues that while income inequality might have increased, consumption inequality is a lot lower. One of the reasons is that the actual consumption of those who own six houses is not that different from those who own one as you can only live in one house at a time. That's an odd argument. If taken seriously it provides support from those on the 'left' who argue for very high levels of taxation for the rich. Let's tax 100% of the value of those 5 extra houses given that they are not providing any consumption or welfare to those who own them."

Am I missing something? Should it be Uncle Sam? Or is Uncle Jim just the ??? Thx.

He's the guy in the photo at the very top of the post. His "niece" in the photo is thanking him for his generosity ;)

A symbol for the 0.00001% uber rich in America who control large sections of the globe?

...and, all the sugar daddies around the globe that redistributes wealth in only the ways that THEY see fit and that most benefits them.

The emerging “tax extenders” package marks a significant step backward on several key issues facing the nation: long-term budget deficits, high levels of poverty (especially among children), and widening inequality. It would permanently enlarge budget deficits — and, by so doing, increase pressures to cut domestic programs more deeply — while favoring large corporations and leaving out millions of families that work for low or modest wages.