The August 2012 state unemployment rates climbed in 26 states and 21 states plus the District of Columbia show a decrease in payrolls. Another month and another horrific set of state employment statistics. 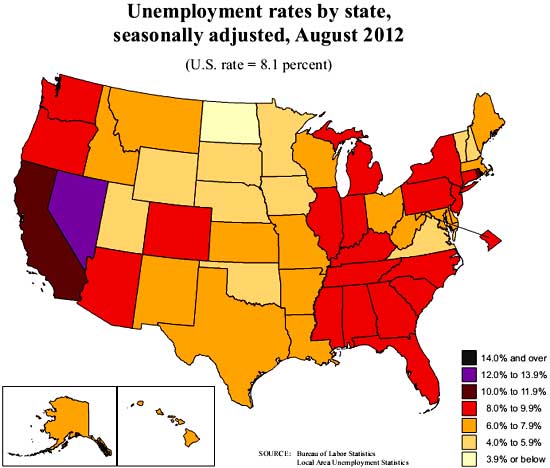 Connecticut (+0.5 percentage point), Michigan (+0.4 point), New Hampshire and Vermont (+0.3 point each), and Iowa, Massachusetts, and Pennsylvania (+0.2 point each). Hawaii and Utah registered the only significant declines over the month (-0.2 percentage point each) 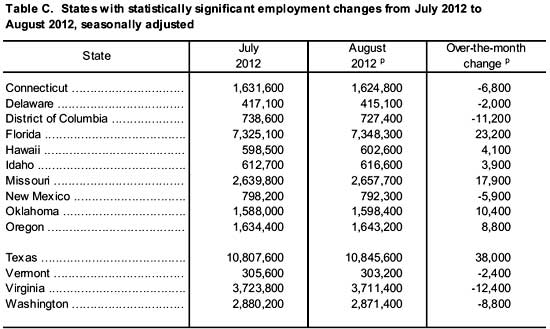 The monthly change in payrolls isn't so hot when one looks at the percentages. Remember California is the largest state by population followed by Texas. Almost 12% of America's population lives in California.

For the year, unemployment rates actual rose in some States. While 42 states saw their unemployment rates drop, along with D.C., seven states had unemployment rate increases and one didn't change at all. This also doesn't mean that much since so many are now no longer counted as being unemployed who actually do want a job.

The change in actual jobs from a year ago is also weak considering how many unemployed, officially at 12.5 million, there actually are. 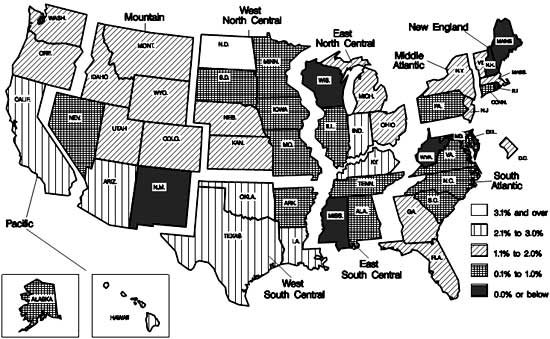 Hi Robert, I've been reading your articles for a few months now and I must say you do a great job of explaining things! Very educational and insightful!!! So over the past few months I've become increasingly bearish on the US economy. With the Euro zone in recession, China slowing down I expect it to spill over into the States. With ISM contracting for 3 months, 3 month retail sales dip to me it looks like it already has. ECRI has been saying this since last September...

As you know US stocks are at multi-year highs, euphoria over QE infinity while leading indicators such as FedEx and UPS lower forecasts. Just like many other companies that have started reporting earnings, revenues are light and their outlooks are grim. Fundamentals are out the window, stocks keep climbing, technical analysis is pretty bearish. This is indicative of a market top to me.

That is my stance in a nut shell. My question to you is do you think we are in a recession? Keep up the good work, I will be back to read up on September's PMI number! Thanks!

Aha! A lurker! Thanks so much for the comment for on these more technical overviews of statistical reports, I know they are somewhat popular, have regulars but few leave feedback enough for me to know if I even made a mistake!

I'm not up on my technicals with QE to know if this is a top or not. . Clearly the markets are not in line at all with economy and these days, so many knew QE was coming, it was already priced in plus we have HFT and God knows what else. Things like Gold, even oil might be already done but other commodities I'm not so sure.

Bernanke left QE literally open ended and said the trick was to get employment up...well, the attitudes of U.S. business is any worker besides an American and any investment besides America as their motto...

so I don't see how much is going to change but with an open ended QE I think Wall Street should be "high" and now have a guaranteed fix for their addiction, unless of course some corporate schmucks get a conscience and hire a few U.S. citizens...(not!)

One thing we agree on is the divergence between the real, production economy and the markets.

I really like PMI and one of these days should run some correlations to see how it compares to IP long term. The problem with so many government statistics are the revisions, I mean we get really different GDP 3, 4 years after the fact. IP also is heavily revised.