The DOL reported people filing for initial unemployment insurance benefits in the week ending on October 12th, 2013 was 358,000, a 15,000 decrease from the previous week of 373,000.  The problem is these figures are really out of whack and we have one state to blame, California. We've seen strange soarings in initial claims before yet this was unexpected to occur again.  So, is there any way to guess what is really going on with initial unemployment claims? The explanation for why initial unemployment claims remains elevated is once again California, but by how much is unknown.  Last week 33,654 new claims were from California backlogs and this week, while we do not have exact figures, the levels are remaining similar in initial claims,  The question then becomes has California seen an uptick in people filing or is their computer system still an issue as it was last week?

Below is a graph of the not seasonally adjusted initial unemployment insurance claims filed in California.  Not seasonally adjusted initial claims is statistically noisy generally speaking.  Yet we can see things went south on California statistics the week of September 9th.  In that week California reported only 18,046 initial claims, when their previous annual average had been 54,600 and the six month previous average had been 52,528 and the previous three months was 52,460.  This means California underreported on that week by probably 34,000, which accounts for all of the sudden October 5th increase of California initial claims to 71,602. 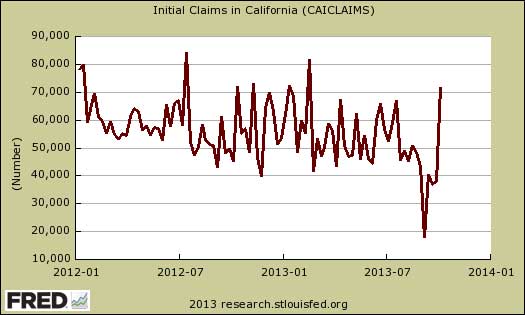 Yet this week, October 12th, California's initial claims are also around the same levels, 71,602.  We do not have the actual figure for this statistic is not publicly available, yet the problem here is last week's sudden spike up in California initial claims pretty much accounted for the computer glitch, so how come the levels did not drop? 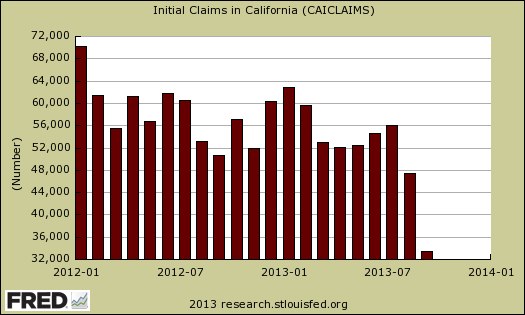 Fun huh?  Thanks California, we're still flying blind due to the shutdown causing a dearth of economic data and you are busy pumping backlogs into your weekly stats!  Worse, if the above is true, that means the declines in initial claims for September might also be very well fiction, which implies correlations to payroll growth are invalid and payrolls probably did not grow as much as assumed.

The government shutdown also has real ripple effects, in spite of the reopening after two weeks.  Temporary disasters still can have long lasting ripple effects in an economy.  The almost million furloughed Federal workers do not apply for or are counted in initial unemployment claims headline figure, they have a different unemployment insurance program, so they are not the cause of the jump.  That said, in their unemployment insurance program, in one week their claims jumped by 68,677 to 70,068 on October 5th.  That's a lot of claims where if there was payout, now will have to be paid back since Federal workers will receive back pay from the shutdown.

That said, the shutdown had strong ripple effects with other contract workers getting laid off, businesses going under because their customers were Federal employees and worse.  We expect initial claims to be elevated as the result of the shutdown, but by how much and how long is unknown.  The shutdown is estimated to have shaved off 0.6 percentage points from Q4 GDP, more than enough to stop payroll growth and increase initial claims.

We won't know what is really going on until California returns to timely reporting of their new initial unemployment claims, so take the next statistics with a grain of salt until that time.  Additionally all states initial unemployment claims statistics are not seasonally adjusted and are incredibly statistically noisy due to the one week reporting window.  Bottom line one shouldn't put their faith in initial claims generally speaking. Below is the mathematical log scaling of initial weekly unemployment claims.  A log scale helps remove some statistical noise, it's kind of an averaging and gives a better sense of a pattern.  As we can see, we have a step rise during the height of the recession, but then a leveling, then a very slow decline, or fat tail.  That fat tail has taken over six years to return to early recession levels, so the time it has taken to drop is also a concern.   There are a lot of people out there who are not counted in labor force statistics who need a job.

For the week, the DOL reports continuing unemployment claims for the previous week was unchanged by percentages and there are still large numbers of long term unemployed.  The below continuing claims figure doesn't include those receiving extended and emergency unemployment benefits.

The advance seasonally adjusted insured unemployment rate was 2.2 percent for the week ending October 5, unchanged from the prior week's unrevised rate. The advance number for seasonally adjusted insured unemployment during the week ending October 5 was 2,859,000, a decrease of 43,000 from the preceding week's revised level of 2,902,000. The 4-week moving average was 2,875,750, an increase of 17,750 from the preceding week's revised average of 2,858,000.

In the week ending on September 28th the not seasonally adjusted, the official number of people obtaining some sort of unemployment insurance benefit was 3,928,697 with 1,379,118 people receiving 2008 EUC, which was extended to January 2014.  That is a lot of people who are going to get their benefits cut at the beginning of the year.  There were 11.3 million official unemployed in August.  The number of unemployed has remained almost static for some time.

As much as people wish it so, most government data is not complete and not real time.  We have repeatedly warned, ad nauseum, do not bank on the initial claims number reported in the press release for that week.  Initial claims for unemployment benefits is a weekly statistic and that implies a very short time window for data collection, it is always revised the next week, almost always upward.  One can have unusual events which throw off the seasonal adjustment algorithm.  One can have missed timing of events that can also throw a monkey wrench in one week's worth of data.  As we pointed out in our weirdness in initial unemployment claims article, states might not report their quarterly adjustments for emergency unemployment benefits and we had the infamous fiscal cliff push past the final hour, which included extending those unemployment benefits for the long term unemployed last year. Yet for this week, there is no reported quarterly adjustment.

From last week, CA added over 11,000 more initial claims and check out this graph to see the obvious distortions this adding.

That said, initial claims also increased in other states by around 2,200 so it could very well be initial claims have increased overall. We cannot tell much about what is really going on as long as California is reporting over 80,000 initial claims in a week though.