Again, just prior to the 4th of July week-end, political activist and consumer advocate Ralph Nader questions the patriotism of corporate America in an op-ed piece, writing to business leaders about reciting the pledge allegiance to the American flag at their annual shareholder meetings.

Last year Ralph Nader wrote to Tim Cook, the CEO of Apple: "Corporations and their attorneys like to be judged as 'persons' under our constitutions and laws. So it is entirely appropriate to judge the character of a U.S. chartered corporation by the measure of corporate patriotism – especially if it is operating worldwide."

A year before in 2011, in the other op-ed piece Nader wrote for the Chicago Tribune: Why not corporate patriotism for a change? -- "For more than 125 years the courts have been awarding corporations most of the constitutional rights possessed by human beings. Corporations — as artificial entities — now almost have rights equal to We the People, even though the words 'corporation' and 'company' are not mentioned in the Constitution."

He also says, "Instead of extending patriotic gratitude, large U.S. corporations increasingly are sending the opposite message --- 'We're outta here with your jobs' --- and that "their products from foreign sweatshops are exported back to the U.S. where abandoned factories and communities proliferate."

How patriotic is manufacturing American flags in China? 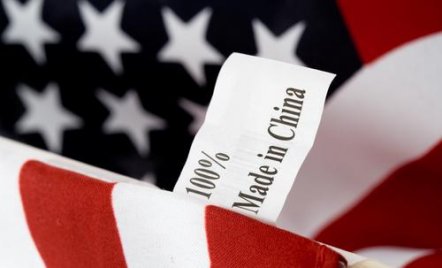 Recently Nader wrote for the Huffington Post:To Big U.S. Corporations: What About Some Patriotism for America?

"These corporations rose to their enormous size on the backs of American workers. Their success can be attributed to taxpayer-subsidized research and development handouts. Not to mention those corporations that rushed to Washington D.C. for huge bailouts from the taxpayers when mismanagement or corruption got them into serious trouble.

How do these companies show their gratitude to their home country? Many of them send jobs overseas to dictatorial regimes and oligarchic societies who abuse their impoverished workers -- all in the name of greater profits. Meanwhile, back home, corporate lobbyists continue to press for more privileges and immunities so as to be less accountable under U.S. law for corporate crimes and other misbehaviors."

" Do you think it desirable to have your CEO and/or your president at your annual shareholders meetings stand up on the stage and, in the name of your company (not your diverse board of directors), pledge allegiance to our flag that is completed by the ringing phrase 'with liberty and justice for all?'"

In this survey, nine of the twenty unions replied that they do pledge allegiance to the flag "with liberty and justice for all" -- or as a substitute, sing the national anthem. Only two of the twenty corporations -- Chevron and Walmart -- responded with an explanation of their company's view of patriotism (but declined to respond directly to the question).

Chevron wrote: "Thank you for your recent letter requesting that we pledge Chevron’s allegiance to the United States as a measure of corporate patriotism. While sympathetic to the spirit of your request, we believe this symbolic gesture is the wrong yardstick by which to gauge corporate patriotism. Therefore, we respectfully decline the request." They went on to say, "Chevron is not subsidized by the U.S. government. Our businesses participate in the market on their own merits." But in 2011 ConocoPhillips CEO James Mulva said that ending the tax breaks for the big oil companies would be "un-American" and "discrimination" -- then refused to apologize to the American people.

Walmart responded with what sounded more like a public relations statement (ignoring the question completely), and just went on to extol all their company's virtues by saying, "Our U.S. associates are 1.3 million strong...we know are success depends on them, and that's why we offer competitive wages."

Some of the companies that chose not to respond are: Apple, GE, GM, Verizon, J.P. Morgan Chase and Co., AT&T, Ford, ExxonMobil, Bank of America and others.

Nader closes his op-ed piece with:

"In an age of increased jingoism about freedom and American ideals, the comparative yardsticks of patriotism should be applied frequently and meticulously to the large U.S. corporations that rove the world seeking advantages from other countries, to the detriment of the United States. It is our country that chartered them into existence and helped insure their success and survival. And these corporations now wield immense power in our elections, in our economy, over our military and foreign policies, and even in how we spend time with our friends and families. The 4th of July is an ideal time to call out these runaway corporate giants who exploit the patriotic sensibilities of Americans for profit and, in wars, for profiteering, but decline to be held to any patriotic expectations or standards of their own."

Because of the difficulty of determining which goods are actually manufactured overseas (many will still add the "Made in America" label), most of us are forced to buy foreign made products...if anything, out of necessity (such as smartphones, TVs, refrigerators and computers).

And who has the time to research the subsidiary of a subsidiary of all these corporate entities? And most of our clothes are also made in sweatshop factories overseas. Are we to just forego all these products? Are we to be called "hypocrites" for buying these (not necessarily cheaper) products while also criticizing the offshoring of jobs --- even though the only store within miles of our homes might be a Walmart, and everything they sell are made in China --- including products that we rely on for our day-to-day living --- as well as our flags on the 4th of July. 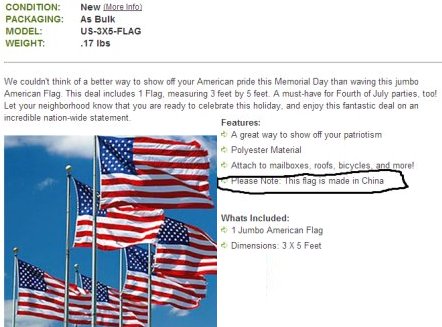