Yippie! Horray! Unemployment decreased in 36 States! Oops, but wait! Guess what. That isn't because we had an increase in jobs.....it's looking like we have people being dumped off the rolls and no longer counted. Isn't is so lovely how our government reports unemployment? You're broke, desperate, now living in a box and you're no longer even counted in the tally.

I digress. Onto the BLS report.

So, what a set of mixed messages, eh? The unemployment rate is down but AP claims people dropped off the rolls?

Let's try to get to the bottom of this report and determine if it's good news, bad news or both, as well as sift through the spin as well as the statistical noise.

Ok, firstly, let's look at the maps contained within the report. 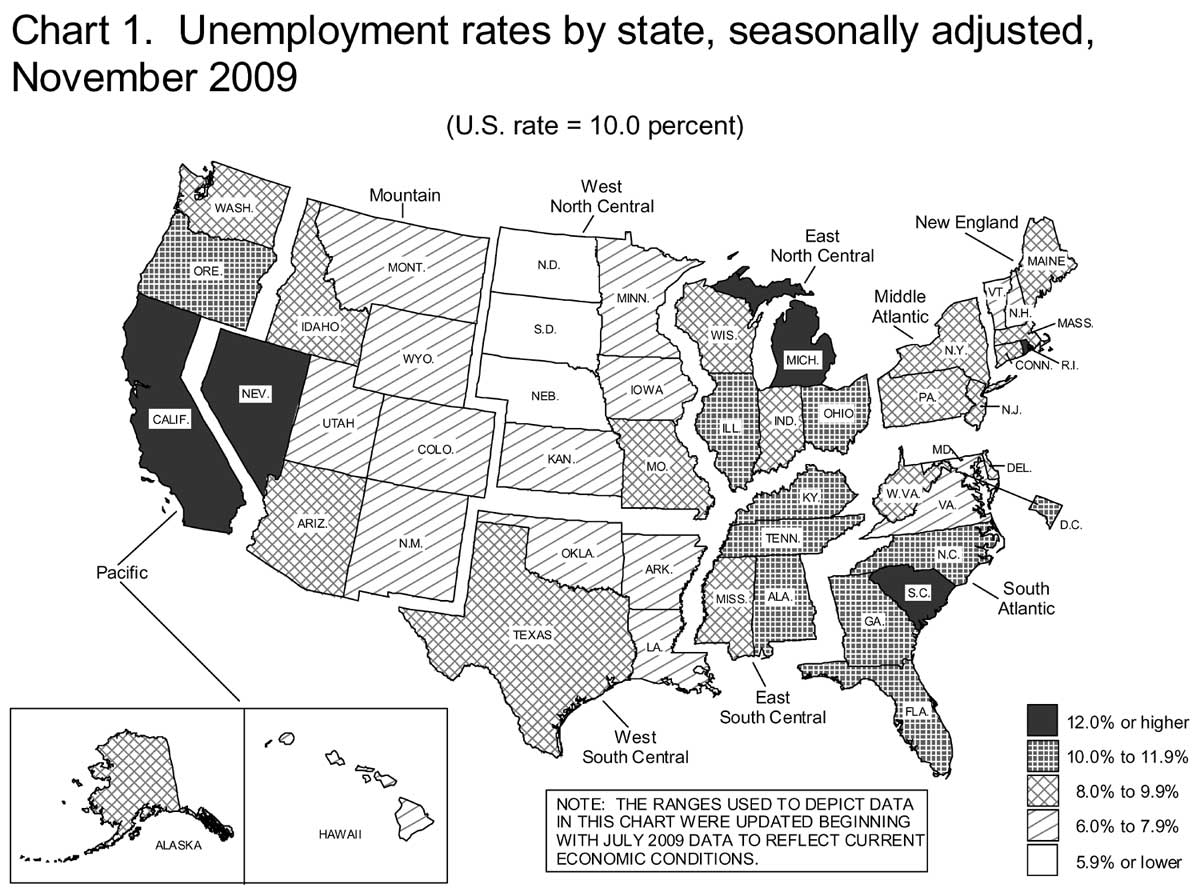 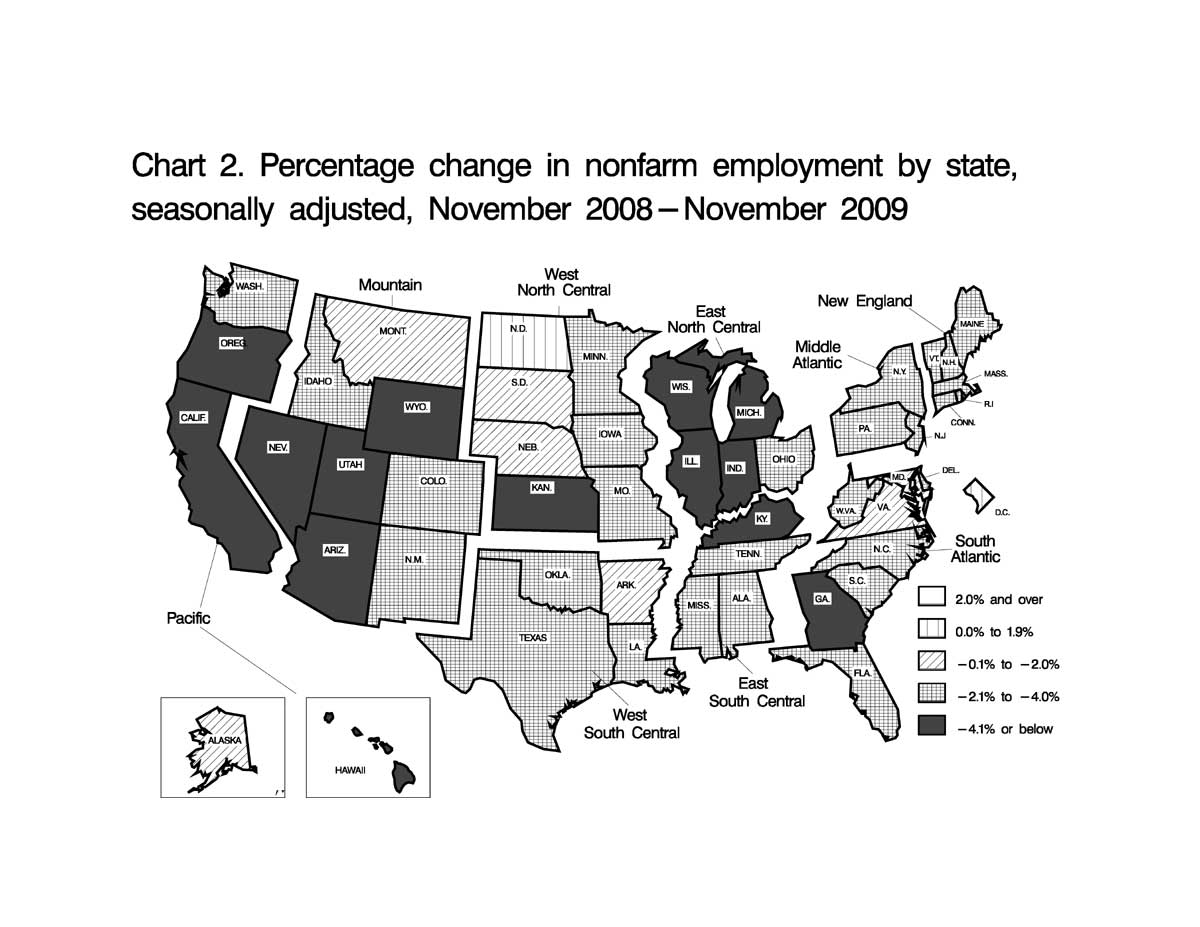 So, what? What does this tell me about this month? I tabulated the below table to gain some insight:

When you see a dramatic jump in jobs, yet not that big of a change in the unemployment rate dropping, such as Texas, one must wonder what's going on since payroll is a percentage change, tabulated from the BLS stats and this conclusion is different from what AP reported as statistically insignificant. Guest workers perhaps?

So, I would say overall this isn't very good news, especially for Michigan in spite of the tantalizing headline the unemployment rate dropped in 36 states. While one sees some whopping negative percentages in terms of payroll about the only state to get a whopping plus in job creation is Texas.

This should make a lot of people happy but will also expose the real long term unemployment a little more.

The Senate passed (the House did earlier) unemployment benefit extensions until Feb. 28 for those due to expire on Dec. 31.

in the databases. It's probably somewhere (and it has to be updated monthly) but I couldn't locate it.

The map shows a great deal of where people live in the "real economy." Florida has hit 11.5% unemployement -- but things are worse in Michigan, California, Nevada, and SC. There are some hopeful signs, but can't come fast enough. Add the blizzards to that and we may see a realignment of values -- instead of the usual obscene spending, let's feed the hungry and homeless this year. I do my christmas shopping at the local food market and place my gifts in the bin for the food bank near the exit. Beats hell out of buying a bunch of "Made in China" neckties people don't really want (and won't wear).
Now, as for the religious side of the holiday, we should all join with Father (or Rabbi) Ben and pray for inflation --it's what the Fed really wants for Christmas. What will he give the middle class in the way of mortgage relief?
Frank T.

they would have given people mortgage debt forgiveness instead of re-inflating asset prices.

Please send $800 billion dollars. We will make sure it barely gets a mention in the main stream press. It is not enough that the Fed has bought up $1.25 trillion MBSes from us, and we're not telling anyone what they are really worth, (hehe, often nothing!). We're Fannie and Freddie and we want $800 billion total now.

Oh yeah, by the way, Merry Christmas, we're suspending our foreclosures over the holiday.

--Joy to the World

END_OF_DOCUMENT_TOKEN_TO_BE_REPLACED

S&P Downgrades.....the United Kingdom - Yes, the entire country - 14209 reads
$50 Trillion of wealth is gone - 9711 reads
Obama Regulatory Reform Plan - Updated: Others Weigh In, Big Business Opposes Consumer Protection - 10365 reads
Democrats Running on Empty and Living on a Prayer - 32762 reads
Using RICO to Stop Union-busting and Restore Wages - 16505 reads
Is this the Winter of our Discontent? - 9027 reads
What Anti-Union Workers Should Know - 35470 reads
The Permanent Dependency Class - 50987 reads
Small Bank Bail Out in the works - 5588 reads
The Banking Crisis - Scathing Critique and Real Solutions - 9285 reads
Will the NY Attorney General Bring Doomsday Charges Against Wall Street? If So, How Long Will He Survive? - 1179589 reads
New York Post Claims Census Falsifies Unemployment Figures - 895365 reads
Safeway Skewered for Throwing 6,000 Workers Under the Bus in Video Parody - 393511 reads
How Many Jobs Are Needed to Keep Up with Population Growth? - 278648 reads
VAT or Value Added Tax is Getting a Look in D.C. - 274122 reads
U3 and U6 Unemployment during the Great Depression - 268381 reads
Tax Cuts for the Rich Do Not Generate Jobs - 256124 reads
House discusses 401k/IRA confiscation - 249572 reads
Delusions of Normalcy 2011 - Dismal Scientists Cheer Up - 243460 reads
The war on the middle class - 239049 reads