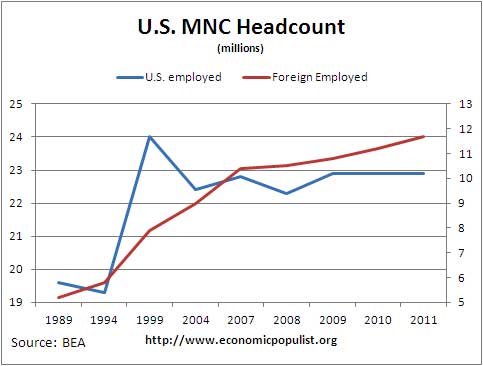 This is the third year in the row for hardly any growth in U.S. payrolls by these multinational firms.  Yet while America goes hurting for jobs, we see multinationals are doing plenty of hiring, just in other countries. 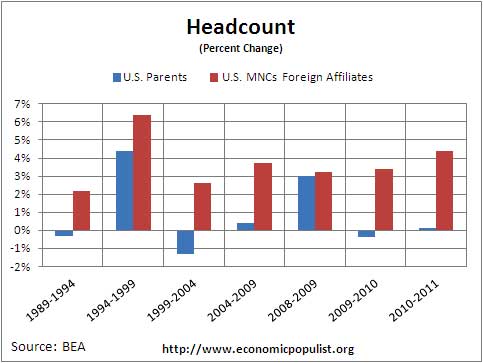 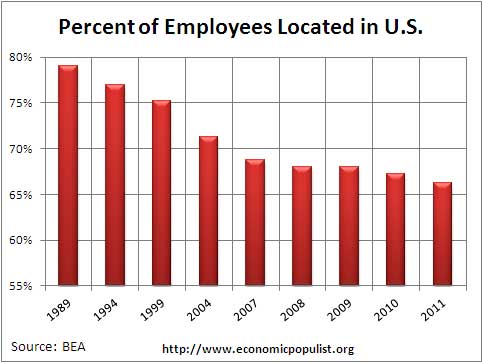 Clearly much of this is due to outsourcing.  Multinationals do hire in foreign nations as they expand into new foreign markets.  For example, GM sells cars in Brazil and China and Heinz sells ketchup in Europe.  Multinational implies global operations and sales around the world, so of course they would be hiring in the markets these businesses are operating in.  Yet below is a graph of multinational sales by domestic, scale on the left and foreign breakdowns, scale on the right.  While sales have clearly increased globally, they are not proportionate to the decline in American workers being hired.  Additionally, one would hope that U.S. multinationals would be producing in the United States, thus hiring American workers and exporting.  Yet from the trade deficit alone plus the personnel figures and capital investments that appears to be improbable. 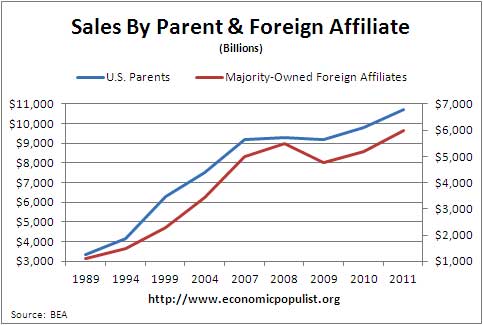 U.S. sales for these multinationals are 1.8 times more than all of their foreign operations in U.S. dollars.  That fact also points to simply offshore outsourcing much of their operations to labor arbitrage the American worker.  Below is the percentage change in domestic and foreign sales for select years of U.S. multinationals.  Again, notice the disproportionate change in comparison to the two employee graphs above. 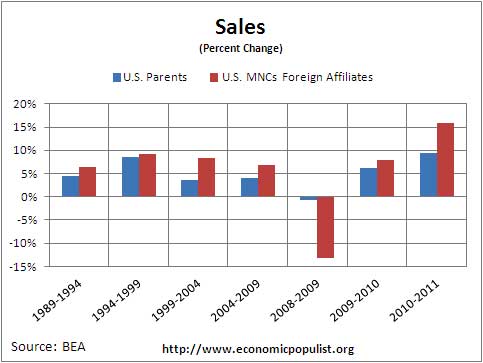 Capital expenditures by domestic and foreign breakdowns are also disproportionate to multinational corporate payrolls.  Corporations buy assets, such as new buildings, equipment, land and construction of manufacturing plants.  By U.S. dollars these sorts of purchases can be much cheaper abroad.  Still, by dollar amounts, multinationals' capital expenditures are much greater for their United States locations than their foreign subsidiaries.  If expansion into foreign markets explained the loss of American employees, we would expect capital expenditures to follow. 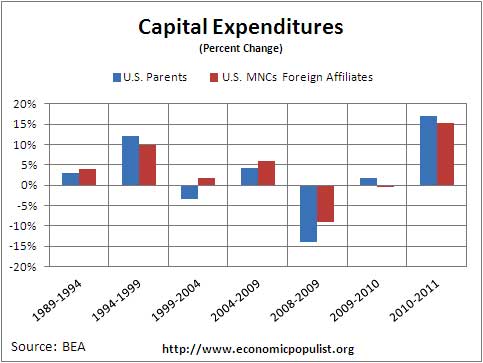 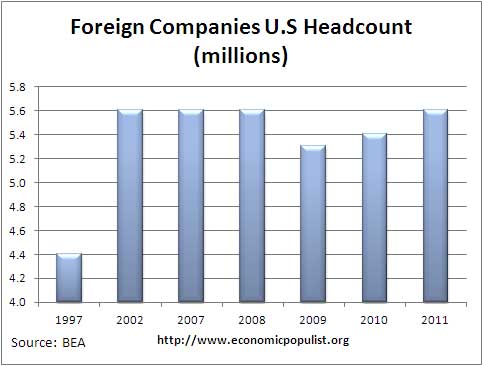 Bear in mind these statistics are for foreign subsidiaries of U.S. multinational corporations where they hold a majority stake.  There are many more American jobs lost due to offshore outsourcing.  The Indian BPO industry continues to expand at alarming rates and most I.T. and many manufacturing processes are contracted out to outsourcing companies.  Those figures do not show up in these statistics for U.S. multinationals do not own a majority stake of those various outsourcers.

This article is an update to multinational corporations hiring abroad, covering the 2010 statistics.