The Bureau of Economic Analysis has revised the National Income and Product Accounts all the way back to 1928.  With the release of Q2 GDP, Gross Domestic Product magically added $559.8 billion to 2012 GDP in current dollars.  Additionally the chained dollar base year was changed from 2005 to 2009, a very funky year where some deflation from 2008 was still present.

U.S. multinational corporations were actually hiring in 2011 as they were in 2010.  Unfortunately as in 2010, they are hiring abroad.  In an updated BEA summary on sales, investment and employment by Multinational Corporations for 2011, we have a 0.1% increase in hiring for jobs in the United States while MNCs increased their hiring abroad by 4.4%.

The BLS released their displaced workers survey and the results paint a dark and foreboding picture for the American worker. Of the people who lost their jobs through offshore outsourcing, plant closures, business failures and layoffs during 2009-2011, by January 2012 only 56% of them had gotten another job. These are people who held the job they lost three years or longer and there were a whopping 6.12 million people in this category.

What's more disturbing, as if that's not enough, is the age breakdown of displaced workers who were in a job three years or longer. While the job losses seem reasonably evenly distributed, those finding other jobs appear not to be, as shown in the below four pie charts. 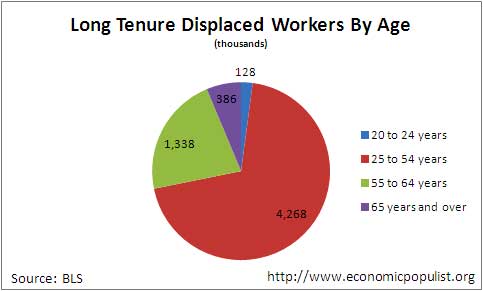 The LA Times outlines what happens when a major manufacturer of advanced technology, offshore outsources for cheap labor. Guess what? Their entire design and process turns into a disaster. Such is the tale of Boeing:

Sure, it's immoral to abandon your loyal American workers in search of cheap labor overseas. But the real problem with outsourcing, if you don't think it through, is that it can wreck your business and cost you a bundle.

Case in point: Boeing Co. and its 787 Dreamliner.

The next-generation airliner is billions of dollars over budget and about three years late.; the first paying passengers won't be boarding until this fall, if then. Some of the delay stems from the plane's advances in design, engineering and material, which made it harder to build. A two-month machinists strike in 2008 didn't help.

But much of the blame belongs to the company's quantum leap in farming out the design and manufacture of crucial components to suppliers around the nation and in foreign countries such as Italy, Sweden, China, and South Korea. Boeing's dream was to save money. The reality is that it would have been cheaper to keep a lot of this work in-house.

The 787 has more foreign-made content — 30% — than any other Boeing plane, according to the Society of Professional Engineering Employees in Aerospace, the union representing Boeing engineers. That compares with just over 5% in the company's workhorse 747 airliner.

The governor of Ohio issued an executive order prohibiting use of public funds for outsourcing. Seems like a no brainer right? Don't use our taxpayer dollars to offshore outsource our jobs? Believe this or not, use of our money to offshore outsource our jobs happens every day, from food stamp and unemployment support to large software design projects. Yet as a result of an investigative journalism piece, Ohio, finally, does the right thing.

"Outsourcing jobs does not reflect Ohio values," Strickland said. "Ohioans have been among the hardest hit by more than a decade of unfair trade agreements and the trickle-down economic policies that promoted offshoring jobs at the expense of Ohioans who work for a living. We must do everything within our power to prevent outsourcing jobs because it undermines our economic development objectives, slows our recovery and deprives Ohioans and other Americans of employment opportunities."

If this doesn't get your blood boiling then you're dead. The Obama administration is spending $36 million dollars to train foreign workers in foreign countries for skills needed to offshore outsource your job. I'm not making this up. $36 million dollars to educate foreign workers, when the U.S. unemployment rate is at crisis levels. Our government is paying for education, classes and training so foreigners can get the skills needed to do American jobs.

Despite President Obama's pledge to retain more hi-tech jobs in the U.S., a federal agency run by a hand-picked Obama appointee has launched a $36 million program to train workers, including 3,000 specialists in IT and related functions, in South Asia.

Following their training, the tech workers will be placed with outsourcing vendors in the region that provide offshore IT and business services to American companies looking to take advantage of the Asian subcontinent's low labor costs.

Under director Rajiv Shah, the United States Agency for International Development will partner with private outsourcers in Sri Lanka to teach workers there advanced IT skills like Enterprise Java (Java EE) programming, as well as skills in business process outsourcing and call center support. USAID will also help the trainees brush up on their English language proficiency.

USAID is contributing about $10 million to the effort, while its private partners are investing roughly $26 million.

This story is pathetic. In order to survive, find a job, a woman has to leave her homeland, move to a low cost country, accept super low wages, to offer telephone support to....her own country.

I'm not making this up.

In October 2008, when the world was reeling from the collapse of Lehman Brothers and job markets were freezing up everywhere, Akane Natori waltzed into a new position she liked. “Things went so smoothly after applying online, and before I knew it, I had the job,” said Ms. Natori, who was then a 26-year-old sales assistant at an import-export company in Tokyo.

There was just one catch, one that speaks volumes about the Japanese economy and the challenges younger Japanese face in a country where college graduates used to count on lifetime employment with the company they joined right out of school. Ms. Natori’s new job — working in a call center answering queries from customers in Japan — was in Bangkok.

BP ordered the owner of the Deepwater Horizon rig, whose explosion led to the worst environmental disaster in US history, to overhaul a crucial piece of the rig's safety equipment in China, the Observer has learnt. The blow-out preventer – the last line of defence against an out-of-control well – subsequently failed to activate and is at the centre of investigations into what caused the disaster.

Experts say that the practice of having such engineering work carried out in China, rather than the US, saves money and is common in the industry.

This weekend BP remained cautiously optimistic that the cap placed on top of the Gulf of Mexico well on Thursday night would continue to hold back the torrent of oil. It is the first time the flow has been stopped since the accident happened almost three months ago. But BP said that the pressure readings from the Macondo well were not as high as it had hoped, which could indicate that it has ruptured and that oil could be leaking out somewhere else.

A little observed provision to remove the tax incentives to offshore outsource your job was passed last Friday by the House of Representatives in the American Workers, State, and Business Relief Act of 2010 bill.

The legislation ties corporate revenues directly to the foreign tax credit. If passed, no longer can a corporation claim credits for foreign taxes yet park the actual profits made offshore in a low tax country. Previously corporations claimed the foreign tax credits, yet only to reduce their U.S. tax liability. The actual foreign revenues were not repatriated into the United States. If one obtains tax credits yet doesn't have to actually pay tax on profits accrued offshore, this encourages the movement of capital, assets and production overseas, including jobs.

Well, at least the Obama Administration is no longer completely ignoring the issue.


Like a scorekeeper for the world, a tiny unit within the Bureau of Labor Statistics tracks globalization's winners and losers, and the results are not always pretty for the United States. Manufacturing jobs here, for example, have fallen faster since 1979 than in Canada, Germany or Japan. Compensation for those jobs dropped here in 2008 but jumped in South Korea and Australia.
Soon, however, Americans may be spared the demoralization in these numbers: The White House wants to shutter the unit that produces them.