By now you all saw the headlines, 12 pct. are behind on mortgage or in foreclosure, but what is behind these numbers?

Firstly the foreclosures are expected to reach an all time high next year.

Now people cannot pay their mortgage simply because they lost their jobs, businesses and income. 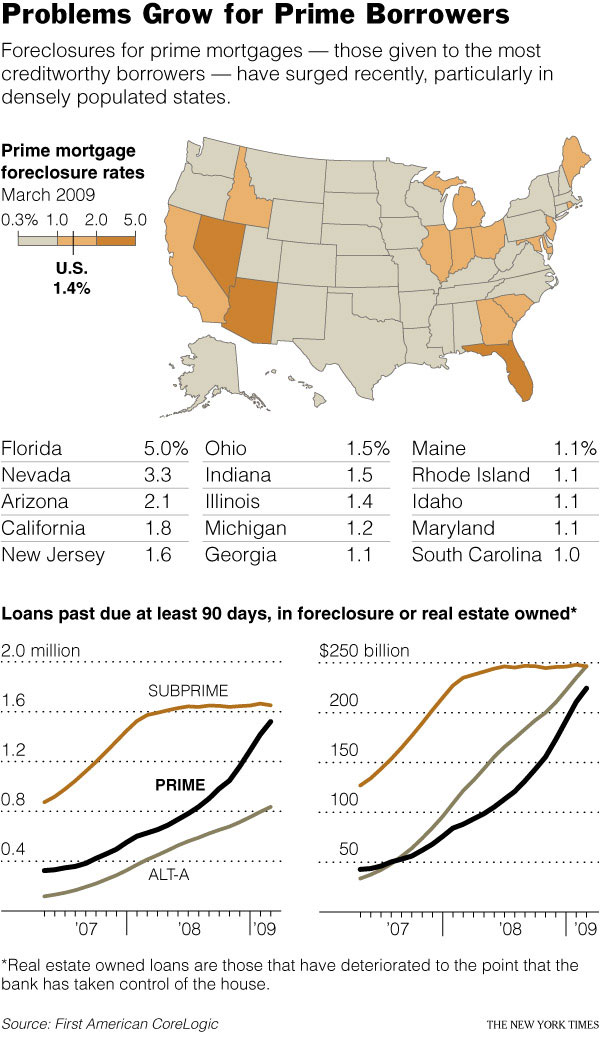 Will this trend convergence of housing prices to income ratio reverse even while prices drop? 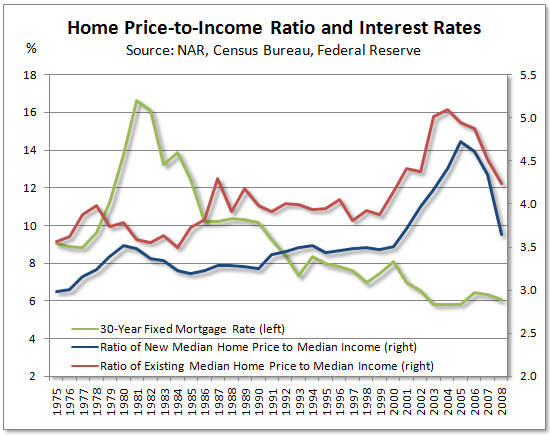 Show me the money!

at least when President Obama took over a complete emphasis on improving the job situation and keeping people in their homes - WPA-like, more stimulus money over tax cuts.

Sad reality is that we, consumers, drive the economy not the financial sector. If we have work then this mortgage/foreclosure crisis doesn't spread.

What happened to "bottom up" approach that was talked about?

I ask the question again: Did Fed and Treasury waste $12 trillion?

recovery w/out jobs and a horrible housing market?

"As we look at the economy, I have to be honest: we're not seeing the green shoots," Sokol said at the annual Ira Sohn Investment Research conference, which drew some 1,200 hedge fund executives to hear top investors share trade ideas.

"That's not surprising to us. It took us 11 years to get into this mess where it is. We went into the emergency room last fall and by January the banking system and economy generally were in intensive care, and we'd expect it to stay there for some time," Sokol said.

If anything, the glut of housing supply could grow larger as a new wave of foreclosures and pending sales breaks on the market.

"We think the official statistics of 10 to 12 months' backlog is actually nearly twice that amount,"

On the other hand EIs (economic indicators), and patterns, correlations, are very real in terms of measuring the overall economic health.

That said, when keyword jobless recovery pops up, that to me says no economic recovery because I am on the ground, in the real world, trying to pay the rent.

But as we can see (from NDD's posts to others who cover EIs) income, labor is now directly affecting the other major EIs so we have bubble up disaster because the U.S. middle class has been tapped out.

This would make a great original post, to correlate the tapping out of the U.S. workforce, the U.S. middle class to overall macroeconomic indicators being repressed.

I swear to God there is this major disconnect between these corporate elites, globalists and how screwing the American people directly affects their bottom line over a long term period.

I think they have deluded themselves into believing somehow they will simply replace the U.S. middle class with some mythical 2.3 billion consumer market in India and China.

Seriously and they are smokin' crack.

about long-term. Most have more money then they need to survive for the rest of their lives. What do they care if in the long-term the "race to the bottom" destroys the middle class? All they know or care about is the short-term.

I'm not sure because I am not in B school, others with MBAs can comment, but my impression is as a rule they believe if one just takes care of the next quarter, the long term will take care of itself.

Now that is quite short sighted. Japan, China are notorious for long term strategy sessions at both the micro economic (each corporation) and macro economic level.

I also think they are operating on some serious mistakes of assumptions....i.e. if they do the China PNTR they will make billions financing it all, with the additional free movement of capital, la de da....(now we are owned by China, that worked out well), or say labor arbitrage. It's like they are looking at head count as "cattle count" in their labor stats, not getting that the more workers are treated as disposable, the longer the quality will suffer and it gets really bad once one gets into the production and innovation skill sets.

Or they think wages and no one bothers to check "income" and the effect on a macro economic scale...

or say they think "minor regional economic disruptions" that are "temporary" not thinking all of these add up to economic Armageddon and in a graph "temporary" is actually 50 years.

I'm wondering if B school takes people out back and beats out of 'em any common sense. ;)

I like the cattle farm analogy. Too many businesses look at employees as liabilities (as do modern accounting methods). If dairy farms looked at cattle that way, they would end up selling all of their cows and go out of business. One of the things that made the US great was the idea of employees making companies better. Employees are assets to a company, not liabilities. When companies and the government start realizing this, they will grow stronger and the economy will improve.

"The three-year housing decline is proving resistant to efforts by the Federal Reserve and the Obama administration to keep homeowners current on mortgages by allowing them to refinance or sell to buyers enticed by affordable terms. Prime fixed-rate home loans to the most creditworthy borrowers accounted for the biggest share of new foreclosures at 29 percent, MBA said, a sign job losses are hurting homeowners."

The solution is in job creation and wage stabilization - not pushing real estate.

The NY Times article has a little more information.


Suspensions on foreclosures imposed by lenders and underwriters have mostly ended, and banks are moving quickly against homeowners who fall behind.

Housing specialists said the number of foreclosures would probably keep rising as more people lose jobs or are forced to trade full-time work for part time.
...
“We’re still caught in this vicious cycle,” said Patrick Newport, an economist at IHS Global Insight. “These numbers were horrible, and they’re going to get worse. This problem’s going to be with us for a while.”

A group of economists at the Boston Federal Reserve said in a recent paper that foreclosure prevention programs could be more effective if they gave direct aid to struggling homeowners, rather than modified loans to reduce monthly payments.

The figures released Thursday suggested that prime fixed-rate loans were supplanting risky subprime loans and rising adjustable-rate mortgages as the force behind the foreclosure crisis.

The foreclosure rate on prime fixed-rate mortgages doubled in the last year, the Mortgage Bankers Association said, and, for the first time, those loans made up the largest share of new foreclosures. In the first quarter, a seasonally adjusted 6.06 percent of all prime loans were delinquent, up from 5.06 percent in the last quarter of 2008.

How Many Jobs Are Needed to Keep Up with Population Growth? - 284673 reads
Saturday Reads Around the Internets - Government Complicit in Libor Mess - 8902 reads
Corporate Profits Soaring Thanks to Record Unemployment - 89728 reads
The Great Worker Shortage Lie is Alive and Well - 100092 reads
You're Born Into It America - 48781 reads
The White House, Big Oil, and the "American Power Act" - 56433 reads
One cold snap uses 11.5% of US natural gas supplies; 8 more weeks like that and our gas storage will be totally empty - 113414 reads
Jobless rate slows, unemployment up and traders are happy - 25717 reads
The Panic of 2008: a turning point - 97279 reads
Bank Failure Friday - Two for the Road - 6434 reads